This is another of those Hulu and Blumhouse movies made as part of the Into the Dark series. Just released it is supposed to be for Valentine’s Day, which I guess I can sort of see. I mean if you have a very dark opinion of relationships and romance. 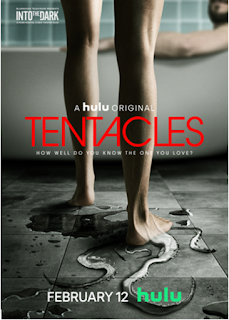 We see a girl packing in a hurry when she hears a noise outside. Grabbing a knife, she is confronted by someone who we only see as a shadow. The shadow has a tentacle! Fast forward to later and we see the same woman burying a bag of cash in the desert and then heading to an open house. She sticks around after they are done for the day and takes a nap on the bed. She leaves and goes to another open house, this time meeting Sam. She introduces herself as Tara and the pair hit it off right away. Before you know it, Tara is moving into Sam’s house and they are spending all of their time together.

The longer that Sam is with Tara the more smitten and the sicklier he becomes. Eventually he as well as the audience figure out that there is something very wrong with Tara. Basically, she is some sort of monster that is feeding off him with the eventual plan of replacing him. She is some sort of shapeshifter you see. So, all of the nice things that she has done for him like fixing up his house and getting him a big show, he is a photographer, was in fact for her when she became him. Stuff happens and then we get to an ending that is more of a beginning of something even worse. Tara/Sam isn’t the only monster running around Los Angeles it seems.

There are some things that I really liked about the movie. Much of the action takes place in the small house that the couple are living in. This means that our main cast members portraying Tara and Sam need to carry the story. I think that they do a very good job and most importantly have some decent chemistry on screen. Their relationship is the key to all the proceedings both good and bad. I also found it creepy that in hindsight her “get to know you” questions take on an entirely different skew when you realize she is doing homework rather than trying to understand her partner. This is reinforced with her dead expressionless face as we see her beginning to copy his voice and mannerisms.

Unfortunately, the movie leans heavily into sex and nudity. He is totally enamored by her and she enjoys him as well. While I understand that this is very important to the story, we get a ton of it and very little of the creature. I wanted less naughty business and more monster business. When you name your movie tentacles, and it isn’t an anime then I’m thinking I should have more of the creature in it. All the above makes for some pacing issues in what is a short movie that clocks in at less than ninety minutes. That should be the sweet spot, but I did find myself checking the clock wishing they would get on with it more than once.

This is an interesting concept with the parasite basically feeding off those around it. Here the monster is in a very attractive package and it isn’t until the very end that it’s true intentions are revealed. I’m sure that there is some big metaphor here about relationships and if that strikes your fancy then you might dig Tentacles. Sadly, I wanted a monster movie and didn’t really get one. Maybe that is my fault, but I just can’t recommend this flick.

Posted by Gutmunchers Lives at 1:53 PM