This is one of those movies that I was sold on with a trailer. It promises a funny horror movie with a diminutive star. They don’t shy away from showing you the creature because the makeup effects are great. It was firmly on my radar and sure enough before too long I had a copy to watch. The trailer lied. 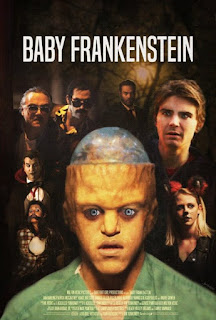 Lance and his mother move into a new house. Helping is Ken, the mom’s jerk boyfriend. They meet the nice guy neighbor, that Ken immediately insults, and Lance wanders off. He discovers a padlocked attic and finds a monster which he accidentally activates. He runs across the street to grab the pretty girl next door named Truth. Together they end up chasing the monster around, figuring out early on that it is basically harmless. While they are bonding we meet Dauvin Lundquist. He works for the company that created the monster and was notified when it activated. It was stolen decades earlier and they want their property back.

Lundquist is offering a large reward and after Ken figures out that the kids have the “Chupacabra”, he isn’t very bright, he goes after them. Not knowing when to stop and obsessed with the pile of cash he ends up kidnapping and threatening to kill Lance’s mom if they don’t hand it over. There is a weird twist, someone ends up in the trunk of a car headed to what is likely a bad end, and the monster ends up happy.

This wasn’t the movie that I was sold by the trailer. There are zero attempts at horror and what comedy they do try fails. The jokes don’t land and if I’m being honest, I don’t think I found anything funny at all about the movie. The closest I came to a laugh was a bit at the urinals and I think a brief discussion of urinary tract infections. Not sure about the details. The rest of the attempted humor doesn’t work. But at least we have a monster, right? Not really. He doesn’t do anything and is quite helpless. This is a movie where no one dies unless the guy in the trunk at the end who maybe dies after the end credits. Again, that isn’t terribly clear.


I get that some people might tell me that this is supposed to be a drama and not a horror flick. Okay fine. Let me tell you something else about this movie. Instead of a cohesive plot we have the kids finding the monster and then running away dominating the story. What are the characters up to while this so-called chase is happening? They go walking in the woods, shop for a couch, buy Baby Frankenstein a costume so they can take him trick or treating, then take him trick or treating. Is that too much excitement for you? Then you are going to hate the swings at the park and the staring at a fish tank scenes. The best part is the bowling montage because watching them learn to bowl is how you get an audience excited about your characters. Baby Frankenstein is very slow and never gets to the point.

I could also add the terrible acting with characters yelling over each other. Not only could I not understand the dialogue, but it started giving me a headache. There is also that generic rock music that so many independent filmmakers like to blast in the direction of the audience. Simply put this isn’t a well-made movie.

I will say that the makeup on the titular character is outstanding. It looks amazing and the actor can move around easily in it, which makes for a good performance. In fact, the best actor in the movie might the one they didn’t give any lines to. Let that sink in. Other than the makeup, I have nothing good to say about the movie. The pacing is terrible, the jokes aren’t funny, and I don’t know what the filmmakers were trying to accomplish. I’d recommend passing on Baby Frankenstein.