note: This review is part of a larger series that I’m doing on the Filipino exploitation and horror movies made in the sixties, seventies, and eighties. While it isn’t necessary to read those to enjoy this review, I do reference them so recommend that you start reading from the beginning of the series. The list of those can be found here. 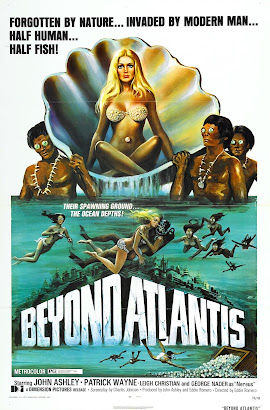 The movie kicks off with a fisherman named Manuel, played by the legendary Filipino actor Vic Diaz, trading some supplies to a beautiful young woman. Taking the rare pearls he receives in payment to the big city he meets East Eddie, played by another legend Sid Haig. Realizing what is being offered Eddie tries to get the location of the woman’s island from Manuel but fails. He does however find out where the fisherman lives which is important later on. Using the few pearls he has Eddie recruits a couple other Americans named Logan and Vic to help him locate the source and harvest the rest. Along the way a lady scientist manages to cajole her way onto the boat by threatening to organize her own trip to the island and drawing attention to what they are up to.

The group arrives and after some shenanigans including the best use of crabs in a booby trap ever they finally meet the locals. The beautiful young woman is Syrene and her father is Nereus. He is king and she is princess. Their loyal subjects are strange fish eyed natives that we find out later are mutated due to their time spent diving underwater and inbreeding. If you haven’t figured it out yet they are the source of the pearls. There are also connections made between those living on the island and the ancient lost city of Atlantis as well as the royal bloodline being kept pure by them mating with outsiders. I suppose that explains the lack of fisheyes… Syrene is supposed to choose one of our protagonists to mate with and then they and the rest will be killed. Of course, they are blinded by the pearls and don’t realize the natives are using them as an excuse to delay their departure. It all ends in an explosive and somewhat odd manner.

By now the names of director Eddie Romero and actor John Ashley should be very familiar. Beyond Atlantis is yet another collaboration between the two, though not in any way part of the Blood Island series. It does follow the very familiar formula of outsiders arriving on an island, this time in search of treasure, and leaving it in much worse shape than when they arrived. Though I did notice the lack of monsters and nudity that dominated those earlier films. After some research I found that when they cast Patrick Wayne as Vic, he insisted the movie have a PG rating and thus a lot of the more exploitative stuff was left out. I know that might bug some viewers, but I feel like it gives the movie some of its charm. 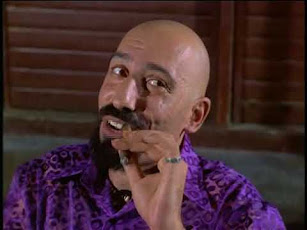 I’ve already mentioned Ashley and Wayne, so I’d be remiss in not saying something about our other male lead, Sid Haig. He is simply awesome as East Eddie dropping some lines of dialogue that always make me laugh. The character is a shifty criminal type involved in all sorts of criminal behavior which is why we get lines like “Go pop for Poppa” when he is talking to one of his working girls. Haig brings a gleeful over the top performance that carries the movie. I get that I shouldn’t be rooting for the violent criminal, but I’ll be damned if I don’t want him to win! Dare I say there are some shades of Captain Spaulding in this character?

The only negative that I will bring up is that they seemed to be in love with some of the underwater footage that was shot. We do get several scenes of them diving to get the pearls as well as some general aquatic horseplay. While I don’t mind it that much it does drag down the pacing a bit and feels a bit like padding. Other than that the movie is solid in both the story and action. Like I mentioned in the synopsis we do get some explosions as well as a gunfight and even a random piranha scene! This movie has it all.

I love Beyond Atlantis and consider it one of my favorite drive-in movies of all time. Director Eddie Romero had the formula down by this time and delivers a fun romp. The cast is excellent with Haig standing out from the others. When he passed away I started thinking about all the characters he portrayed over the years and I came to the conclusion that East Eddie is probably my favorite. Considering how many great roles he had that is saying a lot.

Is the movie a bit cheesy? It is, but that is why you watch it. Clearly, I’m recommending you check it out. When you do, I’d also recommend getting a copy of the new Blu-Ray from VCI. For years your only option was to pick up a VHS rip or a DVD sourced from a 16mm print. But this new disc has a transfer from a 35mm negative and looks amazing.