I mentioned Charles Bronson in the review for Defiance as the go to guy for these action revenge flicks. Most of you probably think Death Wish but I thought it would be fun to switching things up by checking out Mr. Majestyk, an underrated Bronson movie. He was a bad ass before playing Paul Kersey you know! 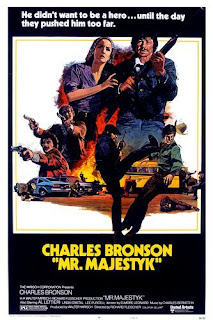 Here Bronson portrays Vince Majestyk, a guy that is just trying to get his melon crop in on time! He runs into a local hood named Bobby that wants him to use his workers to harvest the crop. But Vince wants to use the migrant laborers that will do it correctly. Bobby pulls a shotgun and Vince kicks his butt. It doesn’t end well though because a warrant is sworn out and he ends up in jail. This puts Majestyk on a prison bus with notorious hitman Frank. During a jailbreak Vince takes off with him and offers to return the hitman to the sheriff if they will just give him a couple of days to harvest his crops. Dude just wants to get his melons in before it is too late!

Some stuff happens, and Frank gets away from Vince. But he isn’t’ satisfied with just getting away and has an overwhelming desire to kill him for messing up the jailbreak. The hitman returns to town and begins his murderous plans. But of course, he doesn’t realize that he is messing with a medal winning former soldier. The tables get turned and the killer becomes the “killee” … Not sure that is even a word, but you get my meaning. All is well that ends well, but we never do get to find out if he gets his melons on time.

Not enough people talk about Mr. Majestyk. This is a great movie that follows the action revenge template in a satisfying way. Bronson is awesome as a man who just wants to live the simple life of a farmer. Along the way he encounters other characters that just won’t leave him alone. He doesn’t want to use Bobby’s crew, but they try to bully him into it. This forces Vince to fight back. Then Bobby uses the law to punish him but putting him in jail during the harvest. Dick move, but just acts as another way to push the character beyond his limits. Then the hitman Frank tries to buy his freedom, and when our hero refuses decides to kill him. 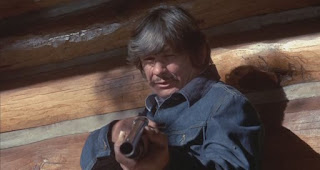 As much as Bronson’s character tries to avoid it he has to get violent. They just won’t leave him alone to harvest his melon crop! I can’t think of an actor that plays the reluctant hero role better than Bronson does. He isn’t interested in violence, but the world is so cruel that he ends up not having a choice. His performance is spot on. Unfortunately, the other characters aren’t as well developed or cast. Most of them are throwaway caricatures that are there solely to either be bad guys or to get hurt to justify what happens later. This is especially obvious with the female leads who have nothing interesting to add to the story.

What the heck! Why am I talking about characters when this is a good old-fashioned action movie? While I like Mr. Majestyk and wish that more people would watch it there are flaws. The bad guys need to be interesting or at least unredeemable and evil so that the audience gets a visceral reaction to their eventual demise. Here the weasel Bobby is more interesting than the killer Frank who is supposed to be the real threat. The dude doesn’t even kill anyone! Then we have the friends of Vince who have terrible things done to them. I didn’t feel any connection to them at all, so when bad stuff happens, I didn’t care.

While still a decent movie and one that deserves to be seen Mr. Majestyk falls into that second tier of action revenge movies. One watch is probably enough for most people. If you get the chance to rent it or catch it on a streaming service that is what I’d recommend.