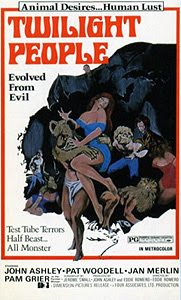 I’m jumping around a bit here having covered the much earlier movie Curse of the Vampires last time. Twilight People is another collaboration between director Eddie Romero and producer/actor John Ashley. This was the movie they made before Beyond Atlantis, which I’ve already covered here. This also harkens back to another movie I’ve already covered, Terror is a Man, as it also is a Filipino take on the Island of Dr. Moreau story. Now that we have that sorted out let’s talk about the movie.

Ashley stars as our hero Matt. Things kick off with him getting kidnapped while diving in the ocean. He meets up with some strange mercenaries that tell him he is on his way to meet the great Dr. Gordon. Once he arrives it becomes clear that the good doctor is up to no good. He is experimenting on people adding different animal characteristics to them thru a procedure that is never completely explained. Lucky for Matt the doctor’s daughter, Neva, has the hots for him and eventually helps him make his escape. Along with them come some of the other victims of the mad scientist. This leads to a crazy ending that involves the mercenaries chasing them and then doing battle with the animalistic experiments in the local jungle.

This movie is so freaking weird and I love it. The plot is laser focused and gets right to the action with Matt getting kidnapped mere seconds after the movie opens. We are quickly introduced to the other characters and then the action proceeds. The chase in the jungle and the resulting gunfight is well executed. The performances are solid with Ashely especially doing a great job in the lead role. Unlike the earlier Blood Island movies and Beyond Atlantis he has to carry this one mostly by himself and does a great job. It is also fun seeing Eddie Garcia, who I mentioned in a couple of the other reviews already, in a smaller supporting role. Jan Merlin shines as the evil henchman Steinman. Solid cast and script make for an entertaining flick. But that isn’t all we get with Twilight People. 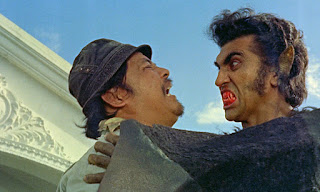 I seriously can’t stress enough how totally bonkers the movie gets when the experiments escape. All of the creatures have their moments to shine. The panther woman, played by a silent Pam Grier, slashes her way thru some bad guys. You also have a sweet love affair between the goat dude and the wolf woman. Oh, and the goat guy’s go to combat move is… if you guessed kicking people you are correct! We also get a “handsy” monkey man for some added fun. There is one final creature in the movie that I won’t mention here so as to not spoil a twist in the big finale.

So far this is my second favorite of these Filipino horror/exploitation movies behind only Beyond Atlantis. It has all of the silly and crazy stuff that I love to see in a drive-in movie along with the quality filmmaking and acting that I’ve become accustomed to when watching an Eddie Romero flick. I highly recommend Twilight People.

Posted by Gutmunchers Lives at 3:13 PM