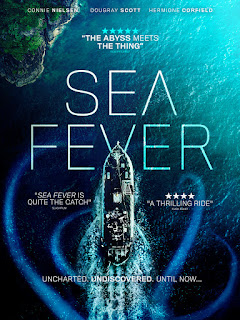 Siobhan is working on her doctorate in marine science which requires that she join the crew of a fishing trawler to gather some specimens and do some research. We find out before she arrives at the pier and meets the crew that she isn’t very good with people. Basically, she has some social anxiety and would much rather bury herself in her work. That helps to establish why she is initially so uncomfortable when she arrives at the small boat where she is going to be forced to deal with other human beings. This is further complicated when the crew sees her red hair, which I guess is supposed to be bad luck.

They proceed out to sea. The first thing that they notice are whales where they normally wouldn’t be. Then the ship is suddenly stopped dead in the water. She dons her scuba gear and dives in the ocean to find some tentacles are holding the boat in place. Tentacles that are part of something much larger beneath them! One thing leads to another and one of the crew members becomes infected by the parasites contained in the green goo that the creature leaves everywhere. Yeah this is a body horror/infection flick. Bad stuff happens, eyes explode, and one by one they all have to deal with the consequences of their encounter with the thing from below.

I was expecting a monster movie but got something much different. There is a creature, but it isn’t really menacing them at all, at least not on purpose. The parasites that get on the boat are there on accident and really only want to return to the depths after growing a bit. The movie makes a point that human beings being a host for them is accidental since it seems whales are what they normally use to reproduce. I found that to be a creative twist that while I’ve seen it before was executed well here and enjoyable. Be warned that this is the kind of movie that takes it time and tries to creep you out not with jump scares or deaths but wants to get under your skin with the idea that small parasites could be inside you without you knowing it until your eyes explode!

I keep mentioning the bit about the eyes. We see it happen on screen as well as another victim after the fact when they board another ship that had been caught up by the creature. This also gives us a lot of the bodies with their throats cut. Foreshadowing the fate of our characters perhaps? The creature is seen on screen a few times and is brought to life with digital effects. While I’m a fan of old school rubber monsters I think that since they are going for a jellyfish type creature and it is supposed to feel otherworldly CGI was the way to go. I do want to point out that this isn’t about the gore or monster and again is more psychological as it attempts to freak you out in other ways.

The camera work and lighting are great. The setting of the boat is brought to life perfectly using the isolation of being at sea and the shadows to create a lot of atmosphere. I don’t wish to invoke a true classic of the genre here and Sea Fever isn’t nearly the movie that The Thing is, but they do manage to capture the same vibe that movie has. At least the paranoia and distrust that is generated by not knowing who the threat is. We even get a tense scene where they figure out how they can test who might be infected which is very reminiscent of Carpenter’s classic. The movie also has a great ending that I didn’t see coming, though I really should have.

I don’t think it will come as much of a surprise when I recommend Sea Fever. I appreciated that the filmmakers went for something a bit different and managed to pull of some creepy fun on a budget. Plus, this is an Irish movie and that always makes things more fun!