note: This review is part of a bigger series the Filipino horror and exploitation movies of the late sixties, seventies and eighties. While it isn’t necessary to read those, I would recommend starting at the beginning as I refer back to the other movies covered in my reviews. Click here for the full list of what I’ve covered.

This might be the strangest of the movies that I’m going to be covering for my made in the Philippines series. While it was shot in California the movie was done in the style of these films and was made by the company releasing the legit flicks. The story is that the distribution company wasn’t coming thru with the money and that the latest movie, Beast of the Yellow Night I believe, wasn’t being released to them. So, they decided to make a movie in the style of the Blood Island series to fill the gap in their release schedule. I guess director and schlockmeister extraordinaire Al Adamson was around and could get it done quickly enough to get it in the drive-in by summer. And that is how we ended up with Brain of Blood. 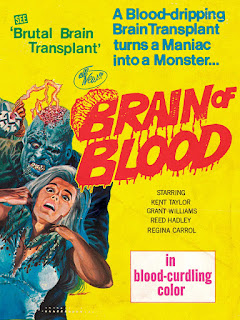 Things kick off with the leader of a foreign country dying. Because he is such a wise leader his closest advisors decide to have his brain transferred into another body without anyone being the wiser. They fly him to the United States and the mad scientist they choose ends up putting the leader’s brain into his lumbering assistant’s body when the one acquired for the surgery is unsuitable. Some stuff happens including the scientist trying to kill off the leader’s friends, some girls chained in the basement being tormented by his other diminutive assistant, and a random assassin that shows up long enough to kill and be killed. Then mercifully the movie is over.

I love drive-in movies and many of those that I enjoy are bad. I say this because I’ve honestly never understood the love for Al Adamson’s work. He seems like he was a great guy and came to a horrible ending (he was murdered and buried under his own patio!) but his movies are terrible. Brain of Blood is a perfect example of this. By now if you have been reading my reviews you know I have an issue with movies not having a plot. Budget limitations doesn’t prevent you from writing a story that can be shot with what you have. But that isn’t even what the issue is here.

The movie has some stuff going for it. There is a bit of a budget, a decent monster, and the totally over the top bit with the girls being tormented by the dwarf assistant. Some scenery is chewed by actors and there is liberal use of cheesy effects to capture the car chase. All of this is okay and would normally work in favor of a movie like Brain of Blood. The problem is that Adamson clearly had no clue how to write a script. Characters, like the assassin that tries to kill the leader’s entourage, is introduced without warning or explanation. Suddenly there is a random dude trying to kill them and we are supposed to guess what is going on? Sure, they eventually have a scene after the fact that tries to tie it in, but that doesn’t prevent the audience from getting confused. This is typical of his work. 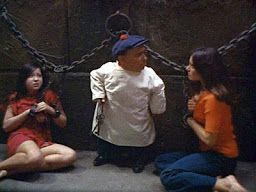 Something else we get a lot of is padding. For example, the large assistant that is used as the new home for the transplanted brain has a messed-up face. Why? Don’t worry because right in the middle of the movie we will get an unneeded flashback showing you what happened. Again, they try and tie it in to things that happen later with the “monster” struggling with behavior from before. But then it has a totally different brain so why would it remember any of that? This is something that could have been at least sort of explained with a bit of dialogue. How does he remember stuff that happened when the body had its original grey matter? This is an example of a third annoying thing that Adamson has in his movies… giant gaping plot holes.

As an added bit of fun, the movie is also horribly boring. Long sequences of inane dialogue followed by scenes that hang around too long and then some that are completely unnecessary. Do I really need so see him park and pick up the lady at the airport? A quick establishing shot would have been enough. Really this is just a miserable flick in every way possible.

I feel the need to reiterate that in no way am I a movie snob. I love drive-in flicks and revel in their cheesy goodness. Are they all great? Of course not, but the good ones have a plot that is easy to follow and characters that are fun to watch. Neither of those qualities can be applied to Brain of Blood or in my opinion any of Al Adamson’s work. Well… okay he did do a Western that I really like. Sorry this is just a bad movie. I’m going to go back and find another Eddie Romero and John Ashley collaboration to cleanse my pallet. Clearly this isn’t recommended.

Posted by Gutmunchers Lives at 4:47 PM