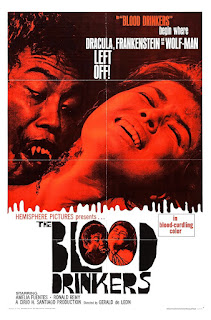 Before I jump into the review, I thought that I would share that I somehow managed to watch and review these movies out of order. Curse of the Vampires is the sequel to The Blood Drinkers, though not a direct sequel. The same creative team and some of the cast is in both movies, though they are portraying different characters and neither story seems to connect with each other. That is except for the main villains being vampires. Now onto the review.

The opening credits play over a horse drawn hearse bringing a coffin to an estate. A creepy bald guy in sunglasses with an entourage that includes a hunchback and dwarf cracks it open once safely inside to reveal a beautiful young woman. We find out that she is a vampire but is ill and needs a new heart. What better heart for her than that of her twin sister! Her mother is part of the entourage and initially seems okay with this plan. We find out that her ex-husband managed to hide one of her daughters away when they were infants, so they don’t know about each other. This becomes important as the “good” daughter is devastated when her adoptive parents are killed by the vampires and she finds out who her real mother is and that she has a sister. Toss in some houseguests including a young guy named Victor and the local priest and you have the team that is ready to battle the evil and save the girl.

This is a strange movie that I think I liked but honestly, I’m not sure. The plot is filled with holes that don’t make sense. For example, Victor makes a leap in logic and immediately blames Dr. Marco for the killings. Marco is the vampire as I realized I hadn’t mentioned that yet. Not sure how he knows that, but he goes to the police to get help. After that happens he leaves the woman he loves with Marco even after he knows he is a vampire and when she tells him she is scared. Why doesn’t he just jump in his sweet convertible and whisk her away? If the movie has some reason for that it never explains it.

Another point of confusion is Marco has the sister for a while in the movie and yet he never tries to take her heart. It isn’t until everyone is literally at the gates that he tries to make good on his promise to save his love by murdering her sister. Toss in a WTH bit where the priest manages to pray the vampire curse away and we see Marco and his lady in the sunlight freed of their curse… until she twists her ankle. Then they are vampires again. Why? I really don’t get this movie.

The Blood Drinkers tries to help the audience with all of the logical loopholes by having the priest narrate the movie and explain what has happened between some scenes. The story does jump around quite a bit. Normally I hate this sort of plot device as it screams out of bad writing and a nonsensical script that can’t do the basics. Here it does a decent job of clearing some things up and moving the story along. It doesn’t make up for everything, but it does help.

This movie is really annoying me because I shouldn’t like it at all. While I won’t claim that this is a great flick it does have a certain cheesy charm to it. This was the first color movie shot in the Philippines but there is a twist to that. The “normal” scenes are what you would expect but when the vampires attack the screen has a red tint and when they are on screen but not attacking it turns blue. At least that is what I think they were going for. It is a little weird, but I dug it. There is also a goofy bat servant that is brought to the screen with a fake looking prop on a wire. It’s silly but I liked it. I’ve already mentioned the hunchback and little person… you can’t go wrong there. The actor playing Marco, Ronald Remy, is great in the role and is clearly having fun portraying the vampire. Overall The Blood Drinkers has a fun vibe that I enjoyed.

Here is where things get tricky. I liked the movie, but do I recommend it? That is a tough question. I have a soft spot for weird low budget movies from the sixties and seventies so this one is in my wheelhouse. I fear that if you aren’t of a like mind you might find it boring and slow. I’d suggest checking out the earlier Blood Island flicks I reviewed in the marathon. If you dig them then I’d recommend giving this one a chance.

This wraps up my first dive into the movies of the Philippines. I hope you enjoyed it and more importantly I hope I might have encouraged you into tracking down a couple flicks. These movies are unique, and while sometimes confusing, worth checking out. I already have started assembling a list for another batch of these so keep an eye out for the next marathon sometime next year.

Posted by Gutmunchers Lives at 12:48 PM