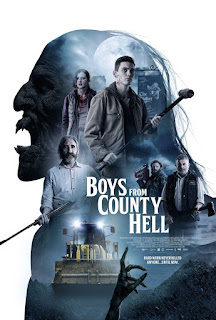 When I saw this pop up on Shudder, I knew that I had to give it a watch. I mean an Irish vampire flick sounds too good to be true. Toss in the fact that it was also pitched as a horror comedy and well I really wanted it to be good. So, was it? Let’s dive in and see.

The movie kicks off with an older couple sitting in their living room watching television. Suddenly they start to bleed out of their orifices and the door busts in, though we can’t see who it is. Then the movie jumps back two months, and we see some locals taking tourists out to check out a cairn marking the grave of a supposed vampire from local legend. They clearly aren’t believers because they scare the shit out of the tourists and laugh at them. But they got free beer out of it so all is good. But then things take a spooky turn.

There are a lot of moving parts with this movie and a plethora of characters. I’m going to do my best to keep it simple and not spoil anything. The legend of the vampire is real and thru an accident he is brought back to life… or I guess un-life. The locals start to get killed off with one or two coming back as vampires. But they have their own unique rules for how that works, which is explained with some dialogue. I also loved how the vampire can feed at a distance which made it even creepier. We also have a conflict between a father and his son, who is trying to make his dead mother’s farm viable. The son is one of the “boys” that must do battle with the vampire. Things get bloody and fun before the finale.

I enjoyed the heck out of this movie. It takes a while for the crazy stuff to get going but when it does it never stops. Limbs go flying, blood gets drained, eyes bleed, noses bleed, and yes vampires get staked. Though that doesn’t kill these “real” vampires it only slows them down. The last half of this movie is very bloody and very fun. The first half we meet the characters and set up the story to come. This is also very well done, and I found myself rooting for them and a bit sad when inevitably some of them don’t make it. I don’t consider that a spoiler by the way. Boys from County Hell is a vampire flick you must know that it isn’t going to end well for everyone. I was a little concerned that we were going to get a lot of CGI but not so much. Too many of the kills happen offscreen but we do get a decent throat slash and an axe to the leg. Though my favorite might be a gag with a metal pole and a vampire’s heart. I think that these were practical or maybe practical with a CGI assist. They look that good so if it was digital, I’m impressed. Where the movie is outstanding is creature makeup. We get a couple “normal” vampires that look about what you would expect them too. But the old vampire that is awakened and set free, Abhartach, looks amazing. He has a very nosferatu look to him and it works perfectly. While they keep him hidden for much of the movie when he does pop on screen, they don’t shy away from showing the audience. The actor portraying the monster also does a great job bringing a character with no dialogue to life. In a movie like this you need to nail the creature and they do that.

This is one of those times when I really wanted to like a movie and ended up have a blast with it. I love the different take on the vampire myth and the fact that the script takes the time to include dialogue explaining the rules for these creatures of the night. Which ironically is one of the things that they changed; daylight is no big deal! If you have Shudder check out Boys from County Hell. If you don’t sign up so you can watch this and some of the other great genre flicks they have for streaming. I highly recommend the movie and the service.

Posted by Gutmunchers Lives at 2:19 PM