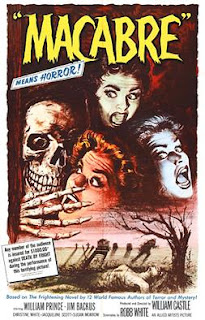 I’m a huge William Castle fan. The man made some of my favorite horror movies of the fifties and sixties. Sure, they are cheesy, but that is part of the fun. In all the years that I’ve been watching and enjoying his movies I’ve never seen Macabre. This is his first foray into what would become his signature gimmicky independent movies so it was about time for me to correct this omission.

The movie opens with the sheriff, played by Jim “Thurston Howell” Backus, talking to the local undertaker. He is complaining that a child’s coffin was stolen from his showroom. While this is going on the town doctor, Rodney, pulls up across the street. There is bad blood between the sheriff and the doctor. They were both in love with the same woman, but she chose the doctor, and died while giving birth to their first child. The sheriff as well as many of the locals blame him for her death as he was off having drinks with another woman instead of taking care of his wife.

This is important because when Rodney arrives home from work he finds that his daughter, Marge, is missing. While out looking for her the phone rings at his house telling the woman who picks it up that she has been buried alive and has four or five hours of air. With this news Rodney swears them to secrecy and goes looking for her based on the clues the caller gave. Why not call the cops? We already know that the sheriff hates him, especially after seeing the flashbacks that explain the animosity. The doctor wasn’t a very nice man. The rest of the movie is the search for the missing girl as well as trying to figure out who took her and why.

I kept my plot synopsis vague leaving out some details because this is a decent movie that I don’t want to spoil. That is doubly important because unlike his later efforts this Macabre isn’t a horror movie as much as it is a mystery. This leans heavily into the who done it and why plotline as they race to find the girl. Figuring that out might help them find Marge in time. That said we do get a lot of entertaining scenes of them creeping around a spooky cemetery in the middle of the night. This leads to a couple of gags that I won’t spoil but are clearly reused later in House on Haunted Hill. I found the story fun and the big reveal at the end a bit melodramatic but satisfying. When everything is explained it all makes sense, including some things about the story that had bugged me while watching it. Can’t say much more than that without spoilers. 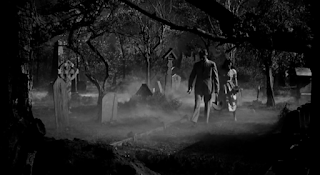 The pacing is solid as well as the direction. Castle had worked for many years doing “B” pictures for the studios and television programs. By the time he set off on his own he knew how to make a lean flick that got right to the good stuff. Macabre is no different. He also cast some great actors in this one including the previously mentioned Jim Backus who even before his turn on Gilligan’s Island wasn’t really known as a heavy. Here he plays a bit of a bad guy. Another face that fans of seventies television will recognize is Ellen Corby who was Grandma on the Waltons. She did a lot of work in old Hollywood and was an excellent go to for a supporting role.

I really liked this movie. Though unlike his horror flicks I’m not sure how much I’ll re-watch Macabre. Being a mystery once you know what is coming a lot of the fun is taken out of it. That said the first watch is a blast and you get the bonus of seeing some early gags from Castle. Plus, I’m a completist and needed to see it. I recommend this one to both Castle fans as well as fans of mysteries.

Posted by Gutmunchers Lives at 11:08 AM