The Sea by R. Karl Largent

I’ve been reading a lot of Largent’s books lately including an earlier tale starring the same character that is the protagonist of this book, Elliot Wages. Since I enjoyed the Ancients, I was all in to check out his next adventure. When I read that The Sea was about a search for Nazi gold and involved the Bermuda Triangle I was sold!

The main character of the book and whose point of view the reader experiences the story is Wages, an author who likes to investigate weird things for inspiration. Minding his own business and headed down to meet an old pal for what he thinks is a friendly visit Wages gets sucked in a search for a sunken U-boat full of Nazi gold. Eventually he finds himself in the middle of the sea on a disabled ship surrounded by strangers, at least one of whom is a murderer. Someone doesn’t want the search for the gold to be successful and is willing to kill to stop it! If that isn’t enough for you toss in a vanished barge, a prehistoric shark, and a fog so thick you can’t see more than a couple of feet. This one has all the creepy hallmarks to be a great time. 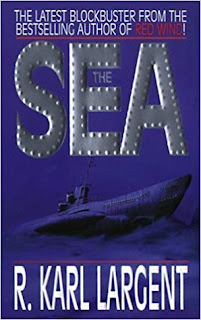 Unfortunately, the Sea somehow misses the mark. The book opens with a lot of great action and mystery. Before we get to the meat of the plot Wages ends up protecting a mysterious and beautiful woman from his past. Her abusive husband comes looking for her so when Wages leaves on his trip, he insists she come along. Though it is convenient that she is also a diver, which the expedition can use. The missing barge and prehistoric shark are introduced early on after they arrive and start diving, which gets us right to the action. Then the sabotage and murders begin and adds to the mystery of what is going on. These are all good things that had me sucked right into the story. But then things took a turn about three quarters of the way in.

I’m going to do my best to keep things vague, but there will be some spoilers coming. I hate doing that but to explain my issues with the Sea I need to mention some specifics. With that warning I’m ready to proceed. First the book mentions the Bermuda Triangle and shows us a semitruck sized prehistoric shark in a few scenes. But then mostly dismisses both, especially the shark that is used to fill out a couple of pages but then disappears. The most important bit with the shark is implied and annoyed the hell out of me, more on that later. Don’t tease me with a supernatural/creature plot and then ignore it. This is further complicated by my second complaint.

We end up with a big conspiracy with characters trying to steal the gold for themselves. I guess that is okay, but the twist at the end is terrible. In hindsight I suppose I should have seen it coming, but the “plan” that was put into motion has so many moving parts that it is almost impossible for them to have predicted it would turn out the way they wanted. The entire thing is so implausible that instead of a “AHA” moment you get a “No Freaking Way” moment. This made me even more irritated with the author abandoning the shark and/or triangle plotline.

The third and final issue that I have with the book is a personal pet peeve of mine. I hate it when we have a protagonist that doesn’t get to be involved in the resolution of the story. Here Wages ends up on a life raft adrift in the ocean while the “bad guys” get away on a boat. Weeks later, after being rescued, he is reading the paper and sees a report that the boat was found without any survivors. The reader is supposed to infer that the shark attacked and ate them… So not only is the “hero” not involved but he doesn’t seem to care about getting revenge on the men who tried to kill him! What the hell is that all about? We get zero resolution.

Largent is a good writer and like I said for much of The Sea this was fun read. But as a good friend of mine likes to say, “they crapped the bed at the end”. This is one of those books that is ruined by the lame ending. I’d recommend checking out The Ancients from Largent, which also features the character of Elliot Wages before reading this one. As far as The Sea goes, I can’t recommend it.