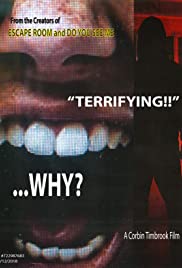 I was digging thru my to watch pile when I found this movie and thought I’d check it out. From what I could find online it was pitched as a slasher movie, but really isn’t. What it is or at least is trying to be is a psychological thriller with most of the movie a cat and mouse game between a woman in an isolated cabin and a crazed killer who likes to wear faces. Well, that sounds familiar doesn’t it?

After showing us a woman getting killed in a parking garage the action moves to a woman and man in bed talking about their big weekend at “the cabin”. They seem to be in love and shit so that is a thing. Then the action moves to a lady and her guy having sex in a tent in the woods. Someone sneaks up on them and hacks them to death with an axe. At this point I had no idea what is going on, but the movie had my attention. Three solid kills right away, maybe this was a slasher flick. Then it all goes sideways.

The woman from earlier in bed is named Blake and we see her driving to the cabin when she gets a phone call. This serves two purposes. One to establish that cell service is crappy where she is headed and two to give us our first glorified cameo. Natasha Henstridge shows up for a hot minute on the phone as her editor. After promising to work on her new book Blake stops at a store and the locals get weird when she tells them she is headed to the Conrad cabin. I suppose they know there is a killer running around. But if so, why not say something? Yeah, I know horror tropes and all.

As you have probably figured out the killer is around and starts to mess with her right away. He even breaks in the house and watches her sleep. Though I found it annoying that he is always magically able to be right there in the shadows and she never sees him. I can forgive a couple of times, but they do it again and again. At some point she had to know he was there. Even more annoying is when she sees the killer, she drops her phone and runs away… aimlessly thru the woods. It was at this point I began rooting for the killer just to get this movie over with.

Other things happen like her boyfriend calling the local sheriff for him to do a welfare check. This allows Lance Henriksen to show up on the phone in yet another glorified cameo. He sends his deputy out and blah blah blah… You know what? I really didn’t like this movie.

Clocking in at only seventy-eight minutes this movie had to work very hard to be this boring. After some fun kills in the first ten the rest of the flick is nothing more than an uninteresting killer in a hoodie walking around the woods/house. All the characters are bland, including said killer, and I honestly didn’t care what was going on. Henstridge and Henriksen are obviously cashing paychecks as both are phoning in their performances… literally! Some of the kills look decent and there is a fun gag with a faceless woman, but that doesn’t save the movie.

I have no idea what they were trying to make here but whatever it was they failed. There clearly was some talent here as the movie looks good and is shot well. The makeup was also fine, and I don’t think the cast was too bad. They just had no plot and not even enough ideas to fill up the short runtime. Oh, and they only got to that length with the inclusion of an obvious nightmare scene and tacked on gag with a babysitter that had absolutely nothing to do with the main story. Why? I guess the title is referring to the audience looking at each other and asking, “Why did I waste my time watching this?”. I don’t recommend wasting your time on this one.