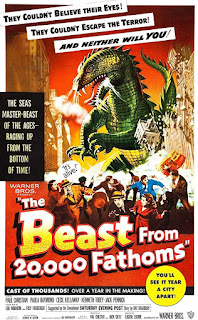 The government is conducting an experiment in the arctic circle where they are testing out some atomic bombs. The most recent test sets something free from the ice. The scientists find this out when they go to check on the results of their latest experiment and run into a dinosaur that had been frozen in the ice but is now on the loose and hungry. Bad things happen leading to the death of one of the men and the other is ignored and sent to talk to the psychiatrist. You know because it couldn’t have been a dinosaur.

When a fishing boat and lighthouse are destroyed those in charge start to listen. A paleontologist gets involved and helps to identify the dinosaur and determine that the creature is trying to return to it’s old hunting grounds. Unfortunately, that turns out to be where New York City is! The creature goes stomping around town eating people and smashing buildings and generally making a nuisance of itself. The army comes along and starts shooting it, but soon discover that it is carrying some nasty prehistoric diseases which means its blood is toxic. So, no pew pew unless they want everyone to die. In the end they shoot/inject it with a radioactive isotope that will kill it as well as the diseases it carries.

This is one of those fifties movies that has somehow gotten lost in the shuffle. The Beast from 20,000 Fathoms has everything you could ask for from a creature feature. The pacing is great with the monster showing up early and often. It was a nice twist that we the audience gets to see what our main character sees but have to watch him be dismissed by everyone else. When the doubters are onboard, the action continues with a series of attacks and battles with the beast as it smashes its way down the East Coast. I also thought the twist of it having diseases and not being able to just blow it away was cool. I don’t remember another sci-fi movie using this as a plot point before, at least not one of these creature features.

The special effects work is a lot of fun. The titular beast is brought to the screen thru the magic of stop motion which is blended in perfectly with some nice model work. They do a fantastic job of adding in the actors and sets to match it up. This is done with some rear projection techniques that are old school, which of course I dig. Some of the best gags are an underwater diving bell, the big finale with a roller coaster, a wall that falls on some actors, and the lighthouse getting smashed. That last one with the lighthouse is an iconic sequence.

My personal favorite and the one that scared the hell out of a very young me is a bit with a police officer. He shoots at the monster and while reloading gets snatched up. The scene lingers on the now stop motion legs kicking as he is chewed up and swallowed. That is gruesome for a movie from the fifties, and it has always stuck with me. Now of course the desensitized old man that I am just smiles with nostalgia. None of the above should come as a surprise though since the legendary Ray Harryhausen was responsible for all of the miniature and stop motion effects.

I have a few more things to mention. The cast includes genre favorite Kenneth Tobey, who shows up in a lot of these science fiction flicks. We also get small roles from two very young actors that would go on to be famous. James Best (Killer Shrews, Dukes of Hazzard) is a radio operator and the great Lee Van Cleef (Spaghetti Westerns… so many Spaghetti Westerns) is the sharpshooter brought in to take the monster down. If that weren’t enough the script was based on a story by Ray Bradbury. Is it any wonder that this movie is so good?

Clearly, I love The Best from 20,000 Fathoms. I grew up on movies like this and can say if I were to list my top five fifties sci-fi/horror flicks this would easily make the top ten if not top five. If you haven’t seen this yet do yourself a favor and track down a copy. It is well worth the effort.

Posted by Gutmunchers Lives at 5:24 PM