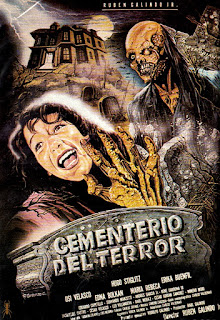 I was going to put this in my slasher movie marathon this summer, but I just couldn’t. There is a lot of the movie that is clearly in the slasher category, but this is one that switches gears partway thru. Normally that is a train wreck in the making but I’ll be damned if it doesn’t work here. More on that later on, time to get to the plot synopsis.

There is a bad guy named Devlon who killed a bunch of people and got gunned down by the police. He had a doctor named Cardan, played by Hugo Stiglitz, who knows he was evil and wants to get the body cremated right away. It seems Devlon was a Satanist and that he was promised eternal life or something like that by the Devil. No one else believes him but he persists and finally forges some paperwork to make that happen. Sadly, it is too late.

A bunch of older kids, high school or maybe college, go have a party at an old house by the cemetery. There they find Devlon’s book, and the guys decide to freak the girls out by stealing a body and reading from the book/casting a spell. Guess whose body they steal? As promised Devlon comes back to life and starts killing all over again. We also see a bunch of younger kids that decide to test their bravery by walking thru the cemetery. This is a bad day to do this. Did I mention yet this all takes place on Halloween night? That adds to the spooky fun and explains why the kids want to scare the hell out of themselves. Bodies pile up, children are threatened, and believe it or not Devlon raises a cemetery full of zombies to chase after the kids. This movie is tossing a ton of shit at the audience and somehow it all sticks.

I can’t for the life of me figure out why this movie works. Normally when horror subgenres are mashed together like this you get an unfocused and unpleasant result. Here they mix the Satanist/supernatural plot with a slasher and add in a dash of zombie movie. To top it all off the last third of the movie are a bunch of kids being menaced by all sort of bad guys Goonies style. That is a dish that should taste like crap, but it doesn’t. Why does it work here?

After the first twenty minutes establishing characters and setting up the story the pacing picks up and the movie is always showing something fun on the screen. That helps keep your mind from wandering and even noticing the tonal changes. The movie also does a decent job exceling at what it is trying to do at the time. The kills are decent, and we get some guts ripped out and a respectable body count of seven. Don’t expect explicit gore but it is respectable. So, the slasher part of the story works. The supernatural part works equally as well. They don’t try any over the top stuff, but we do have a guy shuffling around who looks like a recently dead Satanist. They don’t get too silly by dressing him in robes or shit like that, he is just creepy looking guy in normal clothes. And when they get to the zombies those are also fun. Understand these are more Children Shouldn’t Play with Dead Things grey faced creations rather than Day of the Dead zombies. But I dig the old school look.

The actors, including the kids, are pretty good. Even the younger kids sell being scared very well. The most recognizable name to most genre fans is Hugo Stiglitz who is also pretty good here. Though he isn’t in as much of the movie as you would think. Though in a way his character connects the story and moves the things along, so his performance is important. Plus he is basically Mexican Doctor Loomis so that is awesome. There is also a strange vibe to the proceedings. While made by a Mexican company and director with a mostly Mexican cast it was shot across the border in Brownsville Texas. It feels like an American movie only with everyone speaking Spanish. I kind of liked that and think it gives Cemetery of Terror a unique feel.

Bottom line is this is a great flick. If you like eighties horror and are looking for something different that you haven’t seen before I bet that this will scratch that itch. I’m such a fan that I’m going to start looking for other movies made by this director, Ruben Galindo Jr. If this isn’t a one off from him then I might have stumbled onto a new favorite. I highly recommend Cemetery of Terror.