Well it was only a matter of time before I reviewed a Koontz novel for the blog. He is one of my go to writers when I want to kick back and enjoy a few hours of literary horror. Here I decided to check out Phantoms, which I hadn’t read before, but I really dug the movie adaptation. Though I realize I might be the only person that did… well one of two… “Affleck, you the bomb in Phantoms, yo!”

Jenny is returning home to Snowfield, a small mountain town in California, with her younger sister Lisa. Their mother having died recently Jenny is now her only family. The town is eerily silent when they arrive and quickly enough, they discover a couple bodies. They make their way to the Sheriff’s substation and finding it abandoned make a call for help. This brings the sheriff, Hammond, and several of his men to their aid. Finding more bodies and thinking it might be a viral outbreak or unidentified disease they quarantine themselves and call for help from the military.

I’ll let you in on a little secret… it isn’t either of the above. What is it? Pretty early on Koontz lets the reader in on the fact that there is some intelligence behind the events. Something lurking in the shadows ready to leap out at any moment. This leads to the drama and tension that he does so well at creating. For a good chunk of the story it isn’t clear if this is some supernatural bugaboo or if it could all be explained by science. We get to see both sides thru the different characters populating the story. In the end it is still sort of left up to the reader to decide thru a series of clever twists. I love it when a book keeps you guessing. 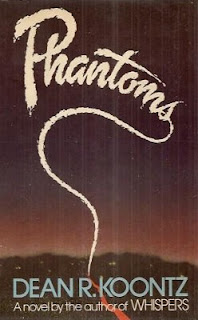 The horror elements to Phantoms are very satisfying. The title refers to the fact that the thing lurking in the shadows can create doppelgangers of those that it has killed. Basically, phantoms that look correct, but aren’t quite right, that pop out and mess with the characters. The thing also enjoys tormenting people and has an excellent running conversation via a computer. In a way I think that Koontz predicted the horrible language used on texting/messaging all the way back in the early eighties! In addition to what I’ve already mentioned above there are some excellent kills where the absorption of victims is described in some detail and we even have a couple times when people are torn apart by tentacles. There really is a heck of a lot going on in this book!

My only criticism of Phantoms is that so much is happening in the book. I loved all the stuff related to the town but there is this odd bit tacked on with a man who killed his family and was arrested by Hammond. He breaks out of jail and ends up in the mountains where he meets another ancillary character who had been mentioned as the leader of a motorcycle gang. They exist only to be influenced by the shadowy creature into trying to get some revenge at the end of the novel in a sequence that feels equally as tacked on. This entire subplot and these characters seem unnecessary.

I’ve already mentioned the movie based on this book. As I normally do, I thought I’d compare the two of them. Sherriff Hammond seems like a much older character in the book, but the movie stars a younger Ben Affleck circa the late nineties. We also get the sister, Lisa, aged up a bit as she is portrayed by Rose McGowan. He was twenty-six and she was twenty-five when Phantoms was released. The movie also does a smart thing and focuses on the happenings in Snowfield, ignoring the murderer and biker gang. Other than that, it is really faithful to the book and what I’d consider a great adaptation.

I’ve always liked the movie and honestly liked the book even better. It’s an excellent read that is packed with enough creepy stuff to keep any horror fan glued to the pages. I’ve only mentioned a couple of the disturbing images and goings on in my review here. There is a lot more of it to be enjoyed. I recommend tracking yourself down a copy of Phantoms.

Posted by Gutmunchers Lives at 9:22 AM