The Forgotten Room by Lincoln Child

This is another in the series of stories surrounding Dr. Jeremy Logan, an enigmalogist. The title and discipline are one that he has made for himself. A history professor by day he finds himself brought into situations to investigate phenomenon that has no logical explanation. I’ve totally read these out of order having already reviewed Terminal Freeze for the site, where he is a supporting character. I’ve also covered the follow up Full Wolf Moon. Thought I’d might as well fill in the gap.

Things kick off with Logan at a press conference having solved the riddle of Loch Ness. Thru solid research he has proven that there is no way that the creature can possibly exist, so everyone needs to stop putting themselves at risk searching the treacherous waters. Then of course we see the private conversation afterwards about destroying the evidence that he has found. Nessie exists, but to protect it and those looking for it the powers that be decide to cover it up and destroy the evidence! Cool way to start the story. This conversation is interrupted when he is summoned to return back to the U.S. to help out an old friend.

The Lux is a thinktank, basically a place where the smartest of the smart can get together and do research. They are housed in a huge mansion that has been their home for a hundred years. One of their retiring members had a mental break and killed himself in a rather gruesome way. Those in charge don’t believe that it was a simple suicide and hire Logan to investigate. Backtracking on the work that the man was doing before he died Logan discovers a mysterious room with an even more mysterious machine in it. The remainder of the book is the unraveling of the purpose of the room and contents. Also why are people hearing voices? And who is trying to kill him? 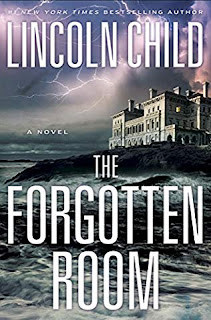 Yet again the author does a fantastic job of playing on the expectations of the reader. For much of the book it seems as if the machine is summoning or at least allowing ghosts to speak to the living. Different characters hear voices and music in the night and eventually they intrude on the day. This causes all sorts of erratic behaviors including attempted suicide and violent outbursts. Logan keeping his mind open dives into the work as if it is some sort of primitive EVP device. But as more of the story is revealed a scientific, but not less fascinating story is told. Much like Full Wolf Moon I like the idea of logical real world explanations of the supernatural.

The last quarter of the book the action kicks up as the killers descend on the Lux after it has been evacuated due to an incoming hurricane. There is a big chase scene thru the mansion as Logan’s survival skills and cleverness are put to the test. Eventually he is able to turn the tables on the antagonists and save the day. If I had a complaint about The Forgotten Room, it would be this sequence. The running around and hiding form the killers gets monotonous after a while. I loved the setup and the mystery leading up to it, but this just seemed forced. It was like Child didn’t have a good way to end the story.

We also get some more background on the character as it is explained he was briefly a member of the Lux before his field of study was deemed unworthy of the institution. This is also the first time that Logan’s wife is mentioned. I enjoy that these snippets of information are parsed out slowly by Child to the reader giving more depth to the Logan character one book at a time.

For me the Forgotten Room wasn’t a slam dunk like Terminal Freeze or Full Wolf Moon. But it still is a solid book that is a decent read if you find yourself a copy. That said if you wanted to dip your toes into the world of Dr. Jeremy Logan, I’d recommend Terminal Freeze as a better place to start. And it is the first time he appears as more than a minor character (he is mentioned or appears in one scene in earlier books) so you would be reading it in order!

Posted by Gutmunchers Lives at 8:58 AM