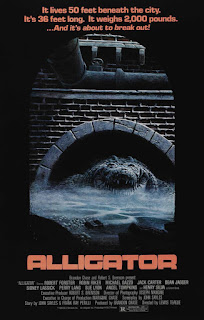 This is one of my all-time favorite movies and one of the best Jawsploitation flicks ever made. The fun kicks off here with a little girl bringing home a baby alligator as a pet after a vacation down south. We see her dad get mad and flush it down the toilet into the sewers of Chicago. Years later she has grown up to be an expert at gators and it has grown up into an oversized man-eating monster with the help of some illicit experiments. Well actually the bodies of dogs used in those experiments. We find out it this is due to eating the hormone laced bodies of the canine experiments and that as a side effect also has an insatiable appetite.

Giant gator that is always hungry. What could go wrong there? When bodies, or at least pieces of them, start to show up in the sewage processing plant local cop David, played by the always awesome Robert Forster, is on the case. Exploring the sewers, he loses a partner to the critter and when no one believes him eventually loses his job. Though part of the firing is him finding the source and wanting to expose the pharmaceutical company responsible for it. The owner is a friend of the mayor and calls in some favors to silence David. Eventually the gator pops into a fancy wedding and those responsible for it existing end up getting what is coming to them. So, all is well that ends well. Except for the gator that is just doing what comes natural and gets blown up for it.

I’ve always loved this movie. The pacing is solid with lots of action sprinkled throughout never slowing down to allow the audience to think about the logic of what they are watching. The characters are likeable, especially David, but thinly drawn. They don’t waste much time on character development or drama instead giving just enough to define them and getting back to the gator as quickly as possible. This is a hard trick to pull of successfully and director Lewis Teague with writer John Sayles do so perfectly. Yeah the guy who wrote Piranha and The Howling wrote this movie so it shouldn’t be any surprise it is as fun as it is.

The gator is brought to the screen with POV camera work and a giant rubber appliance. If I’m to be honest, and I always am, it works much better in the dark sewers than it does on land in the daylight. Still, the gator moves pretty good and while the kills are all people in the things mouth screaming, I still got a kick out of it. There are a respectable eleven kills in the Alligator including a silly smashed limo gag. We also get a hunter chomped, a maid eaten, and some legs yanked off… twice. Though the best kill is one we don’t see when a suburban kid walks the plank into the wrong backyard swimming pool. Yeah, they kill a damn kid!

I’m going to assume that most of my readers have seen this flick. It has been available for years, has had a special edition released, and was all over cable in the eighties and nineties. I know that I’m likely preaching to the choir here, but on the off chance that you haven’t seen it yet I highly recommend that you check it out. Currently it is on Amazon Prime streaming so there is no reason not to.

Posted by Gutmunchers Lives at 10:45 AM