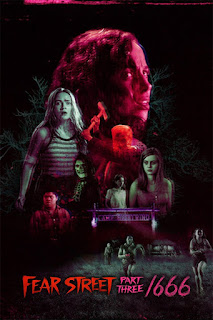 Before I do anything else I’m going to warn you that this review is going to be very vague. The reason is this Fear Street series conclusion has a great twist that I don’t want to spoil. They took what was an already great time and made it better! Yeah, I loved this one too.

Thru some last-minute actions in the last movie we had one of the characters bleed on the bones again. Though instead of just a flash of the witch she jumps back and lives the last few days of her life. We get to see the events that created the legend of the witch play out in real time. Again, I’m going to avoid spoilers but will say things weren’t exactly what we the audience or the characters had been led to believe. This obviously switches around a lot of the motivations and explains some actions so that they make sense.

After we get that background sorted out everything flashes back to nineteen ninety-four and we are again with a grown-up Ziggy and the siblings Josh and Deena. The three of them enlist the janitor from the mall and head back there for a final showdown with the powers of evil. We get to see more of the killers as well as some of the settings from previous flicks getting referenced. Eventually all things are resolved, and Shadyside is finally lifted from the curse it has been under for centuries. Again, I’m keeping this vague because I want everyone to check this series out.

This review is for this movie as well as the series. I recommend going back and reading the reviews in order. You can start with the first one here. Part Three does a wonderful job collecting the stories we have seen and tying them up in a nice little bow. There isn’t a single character or plotline that isn’t explained. What is very clever about this is that I never saw the twist coming because the characters and their motivations made sense in the story we thought we were watching. That isn’t just good writing, but it is great writing. The attention to detail and character in the Fear Street movies, including this one, is what sets this aside from a lot of the other new horror movies that come out. This one doesn’t treat the audience like dummies that just want monsters and gore, but also figures we want a story with likeable characters. 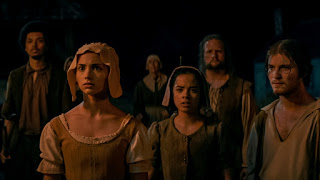 Some other observations that I want to make. This movie has some kills in it, but it doesn’t have the volume or honestly the signature death that the first two do. This is less slasher movie and more witch movie. I don’t have an issue with it, but I did notice it and I don’t want anyone being disappointed. This movie also doesn’t stand alone like the first two do. I believe I mentioned in one of the other reviews that you could easily watch and understand the first two Fear Street movies without having seen the others. Part Three requires that you’ve watched the first two. I can’t imagine trying to make sense of it without knowing what happened in the prior movies. Though since they are tying up all the loose ends the story had to play out this way.

What else do I want to talk about before we are done? I dug how they brought back characters and gave resolution to even those that we mainly saw in the background. Also if you pay close attention to the dialogue there are other characters and their children mentioned. I refer you back to my comment about the writing. The filmmakers and writers too time and crafted a great story that built a world with fun characters. I honestly hope they make more Fear Street movies with this same cast or at least setting. Spoilers (okay there is one) a mid-credits scene has someone stealing something that won’t end well!

I highly recommend this series. Watch all three of them in a row. They are available on Netflix and are certainly worth six hours of your time. Be warned though that everyone I’ve talked to that started these binged them all in one sitting so set some time aside before starting.

Posted by Gutmunchers Lives at 3:35 PM