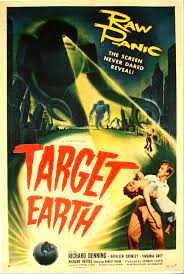 A woman wakes up next to a bottle of sleeping pills. She tries the lights and water, but are both out. She gets dressed and discovers that there is no one else in her building or on the streets. She wanders around getting more and more stressed when she finds a woman’s body lying in an alley. Backing up in horror she runs into a man. His name is Frank, and he was mugged and knocked out. He also woke up not knowing what happened. They also find a couple of drunks named Jim and Vicki. The four of them end up running into a robot one of many who are killing anyone the mechanical terrors can find.

Along with our survivors we see some army scientists trying to figure out how to defeat the robots. Luckily, they have found one that is damaged and are able to experiment on it. They keep cutting back and forth between our survivors and the army working on the problem. Eventually Frank and Nora, the woman with the sleeping pills, are corned on a roof about to be zapped by a robot when the army shows up with their new weapon and saves the day!

I’m shocked that I had never seen this movie before. If you have paid attention here at the site, I love old fifties science fiction flicks. This is a decent one with a superior script and cast. I loved the characters and the actors portraying them. Richard Denning, who played Frank, was in The Black Scorpion (an underrated monster movie) and Creature from the Black Lagoon. He is excellent in this kind of role, that of the hero, and nails it yet again in Target Earth. Whit Bissell has a small part as an army scientist. He also was in Creature from the Black Lagoon and many other awesome genre movies. Though I mostly

remember him as the psychologist who turns Michael Landon into a werewolf in, I was a Teenage Werewolf. The rest of the cast is also solid and were all working actors. This is what is great about these lower budgeted genre flicks from the fifties. They took the time and effort to get good actors in the roles no matter how silly the premise was.

The story is paced evenly and keeps you guessing for a while as to what is going on. They mention “A” bombs and biological weapons, giving you some other options. When they do reveal the robot, it is only as a shadow. We get a neat gag with a newspaper explaining things before finally seeing what the threat is. My only complaint is the constant cutting away to the army story. This happens too often and is told with a lot of stock footage. I was way more interested in the survivors and them hiding from the deadly invaders. They even toss in a human threat which could have been fleshed out more. Still overall I found the story satisfying and decent. It just could have been better.

If there is one thing that might trip up a modern viewer it is going to be the look of the robots. Honestly, they look cheesy as hell. Now I love that sort of thing and it doesn’t take away from what is a serious storyline with death and murder. Heck I forgot that we find out that Vicki tried to kill herself with sleeping pills which is why she slept thru the invasion. This movie isn’t playing around. I understand that this was decent looking for fifty-four and that it was a serious attempt but like many of these older science fiction flicks the creature design doesn’t hold up. But don’t hold that against Target Earth.

Clearly, I liked this movie and am going to recommend it. It blows my mind that this is the first time I checked it out. It won’t be the last as I can see it going into the rotation with Thing from Another World or The Deadly Mantis. I liked it that much!

Posted by Gutmunchers Lives at 2:34 PM