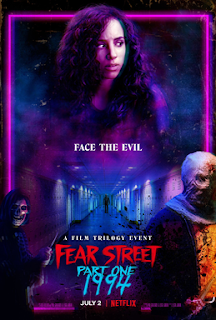 I was never a huge R.L. Stine fan, though I can understand the appeal. I was just a bit too old for his stuff. That said I did enjoy the Goosebumps movies and even some of the television shows. When I heard that Netflix was going to release a series of movies based on Stine’s Fear Street books, I thought I’d give it a chance. I’m glad that I did.

The movie opens with a young lady working at B. Daltons in the mall. It is closing time and she is getting things buttoned up when a crazy guy in a skull mask shows up and starts trying to kill her. He has already killed a bunch of folks and we see him stab her thru the heart before the local sheriff, Nick Goode, shoots the killer in the head and brings it to an end. But of course, it isn’t over because that is the first few minutes of a movie that is two hours long!

We are then introduced to our main characters brother and sister Josh and Deena. There is also Deena’s drug dealing friends Simon and Kate as well as Deena’s ex, Samantha. This group is tossed into the chaos when the killer from the mall starts to stalk them. The dead killer from the beginning of the movie! They figure out that it has to do with them disturbing the bones of the witch Sarah Fier who cursed the town a couple hundred years earlier. There is also some stuff tossed in about the two nearby communities of Shadyside, where the characters are from, and Sunnyside which seems perfect. So, killers, two very different towns, and a witch’s curse. Got that? Oh and the killers from Shadyside’s past also return from the grave in pursuit. 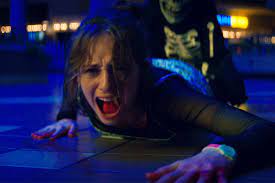 I was surprised by how much I enjoyed this movie. It is an excellent bit of storytelling. The filmmakers are able to tell both the plot with killers running around and high school kids dealing with the curse, all while beginning to establish the greater world in which this tale takes place. In other words, I was totally sucked into the survival horror bit of the story all while picking up on the history that may or may not be important later on. I watched all three movies again with my wife a couple of days after my first viewing and I picked up on things that I missed on the first go round. You really need to pay attention and keep your eyes glued to the screen to not miss some of the clues.

Speaking of clues this is not only a great horror flick with some decent gore, but we also get a great mystery as well. We figure out who the killer is early on, but it is his motivation and connection to the killers from throughout Shadyside’s history that had me questioning what was happening. The how and why of this movie is very important and the details are doled out slowly to hold your attention. Add to this a cast of very good young actors and actresses you end up with an engaging and fun horror flick. 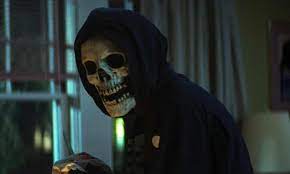 This is a horror movie and I’ve already mentioned the gore. We get a solid seven kills with a couple off screen. What we do see includes a brutal stabbing to the chest, an axe to the noggin’, a stabbing thru the chin, and another knife poking thru a chest from the rear. Though the absolute best kill of all three movies… spoilers I suppose… is the bread slicer. One of the characters gets run headfirst thru the device and ends up neatly stacked. I haven’t seen that one before so that had my attention.

One other thing that I wanted to point out is how well they use the soundtrack to set the scene. If you were around in the nineties, you will recognize the music right away. Hell, when the movie opened with Nine Inch Nails playing, I got the vibe and understood where we were at before the first bit of dialogue. This is an outstanding job and is repeated in later installments.

Here is where I normally say, “Gosh I hope the next one is as good.” Though that would be cheating since I’ve watched all three already and know that they are! This is a fantastic way to spend a couple of hours. I do have to warn you that you will want to jump into the next one right away so set some time aside because this might be something you binge all six hours of in one sitting. I highly recommend Fear Street Part One 1994.