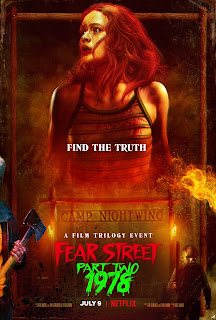 I loved Part One and in that review I already spoiled that I enjoyed the heck out of this one as well. I recommend reading that review before you dive into this one. These movies do standalone but there is some world building that I will reference and not explain. To check out that review click here.

Part One left us with the grown-up survivor of the Camp Nightwing killings talking to the siblings Josh and Deena about what happened and how she survived. Here is when we flashback to another pair of siblings, Ziggy and Cindy, who are attending a summer camp. The campers are divided along town lines again with Shadyside being the oddballs and Sunnyvale being the perfect kids, at least on the surface. Ziggy and Cindy are from Shadyside, though the older sister, Cindy, is trying to “better” herself. When Cindy’s gentle and perfect boyfriend grabs an axe and starts to murder everyone blames the witch. She possessed yet another Shadysider causing them to go homicidal.

The rest of the movie are the killer finding and dispatching victims while Cindy, Ziggy, and another friend named Alice try to figure out the legend so they can stop the killings and save Shadyside from the witch’s curse. They find the witch’s hand but can’t find the body under the hanging tree. The legend says that if they reunite the hand with the body the curse will be over. Of course, we the audience know that the body isn’t there because of the first film, which leads to a brutal ending where the girls fail to stop the killers and instead become victims. And when I say killers one of them bleeds on the hand, has visions, and prompts the maniacs from massacres past to come after them. Though of course we know that one of them has survived. How does this help the kids from 1994 aka. the first movie? I’m not going to spoil it here.

They again do a wonderful job telling a standalone story that also serves to build the world and explain more of the legend of the witch, Sarah Fier. We find out more about the history of Shadyside and understand the rules as how our characters can banish Fier. It was also cool that the audience knows they will fail because we already know where the body is, and it isn’t where they were heading. Though even as jaded a horror fan as I am I didn’t expect the ending to be so nasty. Honestly, they gleefully linger on the agonizing death of a character that was made very likeable. I mean you had to see it coming, but damn.

The pacing is solid and if you ignore the larger story this movie is still a great throwback seventies slasher flick. The kills are plentiful with nine, though four are offscreen. They also break some rules and kill kids in this movie. You don’t see it but there are limbs strewn about in one scene, so you know what happened! That said there is a nifty axe to the head, a couple axe kills with chests being beaten in, and a head goes flying. My favorite kill though is an axe to the face splitting it. The cuts are quick, but the gore is explicit, so I had a good time with them.

I see a lot of retro slashers coming out and honestly most of them fail miserably. Not only does Fear Street Part Two work to move the greater plot along but it is one of the best retro slashers that I’ve seen come out. Oh, and like the first movie they do a wonderful job with the music. Though I will admit that they use one song which is forever linked in most genre fans with a different franchise. That was a bit distracting as it shows up twice. But hey they had some Captain and Tennille so that was awesome!

I highly recommend everyone check out all three Fear Street movies. Netflix has certainly upped their game with these. I can’t wait to talk about the third installment and hope that this is a continuing project.

Posted by Gutmunchers Lives at 3:17 PM