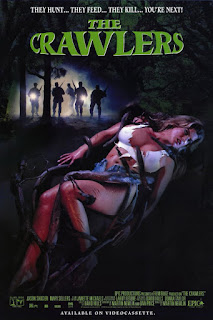 A truck is driving with ominous music playing in the background as the credits roll. Then we meet a couple of girls on a bus, Susan and Josie. The bus stops at a gas station and leaves before Susan can get back on. She ends up catching a ride with a creepy dude who gets all grabby and ends up chasing her into the woods. Susan is attacked by something and killed. Then we see that Josie is returning to her hometown nearby. She has an ex-boyfriend, a precocious brother, and a few other familiar/friend character archetypes.

There is also a science guy who works at a nearby nuclear power plant. He likes to walk around the woods with his Geiger counter and notices that there is a lot of radiation. Maybe that is what got Susan! Well sort of. The plant is run by a crook who has been embezzling money meant for the disposal of nuclear waste and instead has been dumping it in the woods. This mutated not the trees but just their roots. Yep, mutant tree roots are killing everyone! Stuff happens like suicide, the sad demise of the heroic hooker, rednecks shooting at trespassers, and of course the big final battle. You know how you kill roots? Why you bury them of course! Wait… what?

I should have known. The minute that I saw this was co-written and co-directed by an uncredited Joe D’Amato my alarms should have been going off. I mean when he is good, which honestly isn’t often, he makes some fun cheesy flicks. But when he is bad… well you get the idea. This is a bad movie. The story is inadequate for the ninety-minute runtime. We have far too many characters and storylines for the movie to build any momentum. Instead of seeing the roots attacking people we get a lot of walking and talking. There are not one, but two scenes with different guys hanging with the hooker talking about stuff. By the time the bodies start to drop I was already bored out of my mind and wanting the movie to be over. That isn’t a good thing at all.

The creatures in this movie are basically just roots. That means they can just have some rubbery tentacle like things flop onto the actors when the things attack. I’m not kidding about this either. This movie reminded me of a very sad Bela Lugosi rolling around being “attacked” by the rubber octopus all while trying to wrap the tentacles around himself. It is that bad. Things aren’t helped by the goofy faces that many of the actors make as they are dying. Though it is kind of funny and is one of the few things I enjoyed about The Crawlers.

If I’m honest the terrible writing also gives us some awkward dialogue that itself is further complicated by a cast that simply can’t act. Some people overact and others barely can get their lines out before apparently falling asleep. I’m used to some bad acting, but this might be the worst that I’ve seen, at least in a long time. This movie was a real chore to get thru and I’m recommending that you don’t bother. Bottom line here this flick is bad… really bad.

Posted by Gutmunchers Lives at 10:05 PM