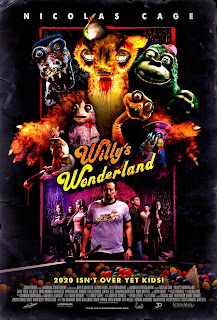 Nic Cage has been getting a lot of buzz with the odd horror movies he has been doing in the last few years. Everyone went nuts over Mandy, which I honestly don’t care for. I thought he was much better in Mom and Dad. But when I saw this trailer and it looked like it was Cage versus a twisted take on Chuck E. Cheese, I knew that I had to watch it. So as soon as the movie popped up on Hulu I was in!

Cage plays a mysterious drifter cruising down the road in his bitching Camaro and drinking energy drinks according to his watch’s alarm. Seriously he stops what he is doing, no matter what it is, and goes to grab a drink when it goes off. He hits a spike strip and blows all his tires. A convenient tow truck rolls by and picks him up offering to replace the damaged wheels, but only takes cash. So a local businessman offers to pay for the repairs if he will clean up Willy’s Wonderland, a kid’s restaurant with animatronic mascots that he is hoping to reopen. Cage’s character agrees and off he goes.

As a horror fan I’ve seen this before. This is clearly some sort of setup that the locals are in on. After the doors are chained the fun starts. The animatronic critters start to come to life and try to kill him. Oddly enough this doesn’t seem to bother him as he tears thru them like they were tissue paper. Wrapping his wounds up with duct tape after each encounter he changes into a different shirt and continues to clean the place up. Even after some kids break in to save him, he continues to clean and destroy the homicidal robots, ignoring their warnings. Though we do get a bit of background about how the place came to be the way it is and the bargain the locals had to strike to keep themselves safe. Spoilers he wasn’t the first traveler that was sacrificed. Though as one character eventually points out, “He isn’t locked in here with them. They are locked in here with him!”. That about sums it up as the tables are turned on the killers with that simple but fun twist.

This movie is vintage Cage at his craziest. Before I get too far in, I do need to explain that I would have used his character’s name in the review, if he had one. The credits list him as the janitor and since he has no dialogue there is nothing in the movie to change that. You heard me right, he has no lines! Cage’s performance is nothing but blank stares, grunting, violence, and occasional manic bursts of energy. Who is he and why isn’t he bothered by the situation he finds himself in? They never explain and I dig that. He is sort of like a force of nature that blows into town and kicks ass.

Again, I also thought it was a neat twist to turn the familiar trope of a stranger being victimized by a small town/locals on its head. Normally our protagonist is tossed to the wolves and survives by the skin of his or her teeth. Here it is clear that the killers are in trouble from the first time one of them shows up. One by one he waits for them to animate and take their turn trying to kill him picking them off as they appear. All the while quietly cleaning and going about his business. I do question the need to have the kids break in and do stupid shit to get themselves murdered. The extra kills are nice, but it might have been more fun if he just beat down the monsters and picked his car up in the morning leaving the town confused in his rearview mirror.

The kills themselves are mostly tame with only the eventual demise of the sheriff being memorable. The best stuff is Cage’s character tearing apart the mechanical murders that are chasing him around. Hydraulic fluid flows freely as he dismantles them and stuffs them in garbage bags. The design of the mascots is decent and really do look like the sort of thing you would see at a place themed for kids. The only exception is this fairy character that is clearly a woman wearing an oversized mask. But the others are fun.

This is Cage’s movie, and I was amazed at how much I was digging the character. He is funny and interesting without ever speaking a word. He also has that special bit of crazy in his performance that only comes out with the right material and here it is perfect. I found Willy’s Wonderland to be an entertaining and different horror flick. I can’t ask for more than that. I highly recommend this flick.