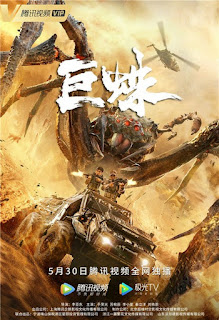 You know what I like? A movie that gives you what it promises and that is exactly what Giant Spider does. In this Chinese flick we see that some science types have brewed up a batch of spiders that have accelerated cell growth, which means they regenerate and grow really big. Probably not a great idea… just saying. Bad stuff happens and we next see a group of military types sparring and working out. They have been chosen to take a doctor and his lady bodyguard, think Chinese Black Widow, out to see why the lab has quit responding.

Before you know it, and I mean that as this movie wastes no time getting to the good stuff, they are zipping across the desert in some cool vehicles. Along the way they meet some spiders in the desert that have already escaped as well as some terrorists/mercenaries that they thought were holding hostages. Oops they were fighting the spiders too and now they are all dead! They get to the lab and Chinese Black Widow uses her metal arm to unlock the door. She also does Kung Fu and has a laser sword so super cool. The place is full of spiders and the head lady scientist who is now part spider herself because she did science stuff. People die and stuff blows up.

It sounds like I’m making fun of this movie, but I’m not. This is a very simple and straightforward monster movie and I really liked it. The characters, with the exception of the lady with the metal arm, fit all of the tropes for a flick like this. The doctor has a secret and is a bad guy, the funny soldier dies horribly… well most all of them do so yeah. There is a bit with a guy blowing himself up while cornered by the monsters, which is a familiar scene. The information is more valuable by those in charge then the men are. Though being a Chinese movie, they are very careful to make sure it wasn’t the government who did any of this. You know because of labor camps and all that.

The pacing is breakneck and the action scenes well staged. We get a lot of bug attacks and firefights. Like I said there is also some Kung Fu action as the ammo runs out and it comes down to laser swords and knife fighting. This is very entertaining but leads me to my one big complaint about Big Spider. The creatures are all CGI, which I expected. What I didn’t see coming is how bad some of the digital shots were. Models being used repeatedly in the shot with the same movement. Shots where the digitally inserted spiders aren’t following the terrain and others where they appear to be faded out. If you are going to go digital, you need to do better than this. The kills are also mostly accomplished with CGI and here it looks a bit better. I mean I still would have preferred latex, but you can’t expect that sort of thing anymore.

Even considering the flaws with the monsters I still enjoyed the heck out of Giant Spider. It promised me a huge arachnid and delivered. Filled with lots of action this movie will be over before you realize you have just spent eighty minutes watching it. Not a classic but worth a look.

Posted by Gutmunchers Lives at 9:44 PM