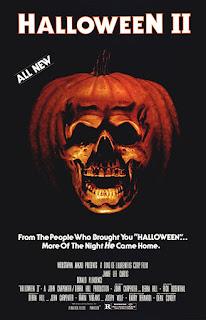 Horror movies have spawned many sequels over the years. Of all of them I think this might be the best or at least the cleverest. This movie takes place immediately after the end of the original Halloween. Michael has picked himself up off the yard where he landed at the end of the movie and is wandering the neighborhood, injured but still ready to grab another kitchen knife and continue his work.

While this is going on Loomis is still looking for him and the girl that got away, Laurie Strode, has been taken to the hospital. Remember she was pretty beat up after her encounter with Michael. Eventually he finds out where she is and heads off to finish the job, which isn’t a good thing for the staff. As he makes his way thru them, collecting quite a body count, Loomis is grabbed and removed from Haddonfield. Seems that the state officials want to distance themselves from accidentally releasing a mass murderer. Though Loomis does make his way to the hospital for a final showdown with Michael.

I really like this movie and think that having it pick right up at the end of the first was a genius idea. They basically continue right along with the same night of terror. Laurie is still traumatized, and Jamie Lee Curtis is great again in her role. Pleasence is also awesome reprising his role as Loomis. He manages to play right on the edge of overacting without crossing the line. He also gets more screen time as Curtis spends a lot of the movie in a hospital bed. Much like the first movie we get a great stalking/chasing sequence to finish up things. Only this time it is in a creepy hospital.

In my review of Halloween, I mentioned that I don’t consider it a slasher movie because the kills aren’t as in your face. In this one they are more like what you would expect from a slasher flick. A security guard takes a hammer to the face, needles are driven into eyes and temples, another person is cooked alive in a whirlpool, and we even get someone drained of all their blood. That last one makes quite the mess and provides a bit of slapstick. There are a lot more kills and many of them are on screen. Carpenter didn’t direct this so his less is more attitude from the original isn’t carried over. 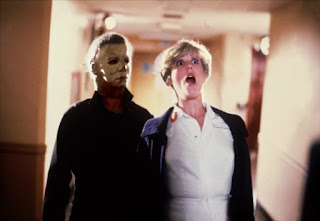 I have two big complaints about Halloween II. First is without Carpenter at the helm the stalking scenes where Michael is pursuing Laurie aren’t nearly as good. The setting of the hospital has a lot of potential but there isn’t much tension built up. The other big thing that was a huge mistake is giving Michael a backstory and motivation. It is in this movie that we find out Laurie is his sister and that he wants to kill her much like their older sister and the beginning of the first movie. I liked it better when he was the shape. No reason, no motivation, just a force of nature that wanted to kill. Pure evil plays much better.

In the end we have the same great actors, Curtis and Pleasence, given a good script that continues the story. There are more kills, and they are executed nicely on screen. While not nearly as good as the original I still give Halloween II credit for doing its own thing. If you haven’t seen this one it is a worthy sequel. Now onto Halloween III.

Posted by Gutmunchers Lives at 4:58 PM