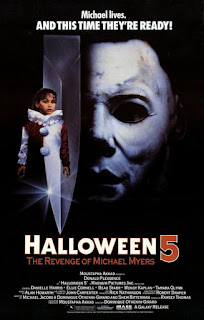 When last we saw Michael, he was being shot multiple times and falling into a mine or well. This movie shows us that he managed to roll out into a creek and float downstream until being helped out by an old man with a parrot who lived in a cabin. We are led to believe that he then proceeds to lie there in a coma for a year waiting for his next chance to go after his niece Jamie. The old man apparently just lets him lie there until he wakes up. Also, the police never go looking for the body I suppose, because it doesn’t seem like he would be that hard to find. Lots of unanswered questions.

But hey at least we know that Jamie stabbed her adoptive mother and is now possessed by the killer spirit that plagues the family. Only not really. In this movie she has spent the last year in a hospital being treated for being traumatized by her attempted murder. She can’t speak and starts having bad dreams after Michael wakes up. Her adoptive sister from the first movie is back, but just long enough to introduce another batch of teenagers to get murdered before she too is dispatched by Michael. The idea of her being the next killer is totally dropped as he tries to kill her yet again, all the while building up a body count.

I could keep trying to explain the plot, but it isn’t worth the effort. This movie is a complete mess that clearly didn’t know what the hell it was supposed to be. The tone shifts continually from the murderous rage of Michael, to the teenagers being irresponsible, and finally we get some comic relief in the local cops. They even get their own silly theme song and bungle their way along until they are brutally murdered… God Damn it movie what the Hell are you doing? Best of all is a mysterious guy in black boots that gets off a bus and sneaks around Haddonfield. He isn’t that important until we see him lay siege to the jail and breaks Myers out after Loomis had finally captured him. What is that all about? You have to wait for the next movie to find out. The Jamie character, which had been setup as central to the story is left abandoned in the middle of the police station as the writers decide to wander off in another direction with the jail break.

This movie has a lot of ideas, none of which are developed. This makes for an uneven, illogical, and difficult to follow story that wears out its welcome quickly. There are more examples than I’ve listed above but why bother? I can’t think of a franchise that kept switching gears and rebooting itself like Halloween. With part four they tried the Jamie character and added some psychic connection to Michael. They began developing it more here and then bailed to start something else that was then followed up on in the next movie. I had some hope that the kills would be decent since I saw KNB was credited for the special effects work. We get one fun kill with a rake to the face that is on screen and fun, but the rest are either offscreen or tame. There is nothing here for fans of gore.

How could the people in charge run the Halloween franchise so far into the ground that this was the best idea they could come up with? It doesn’t even feel like a finished product and has that tossing things at the wall to see what sticks vibe to it. Don’t bother wasting your time on Halloween 5. I can’t believe that I have so many more to watch before I’m done with this series.