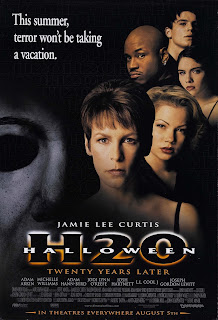 I think that the creative team behind the Halloween movies realized that they had painted themselves into a corner with the attempts to create some sort of mythology for Michael in parts four, five, and six. What do you do when that happens? Well as we will see again in this very franchise you just reset things. This movie pretends that the events after Halloween II never happened. Though I don’t think that was supposed to be the case originally as they apparently shot stuff to reference the other movies, but it was cut. For the purposes of this review we are just going to assume they meant to ignore them.

Laurie, Jamie Lee Curtis’ character, is now running an exclusive private school under an assumed name. I guess she does this because she wants to forget the past. If you remember both Michael and Loomis were apparently killed at the end of part II. Though it does seem that Loomis must have survived as they reference him. Oh, and this is also the first movie in the franchise which doesn’t star Donald Pleasence who had passed away. But Michael isn’t dead, and he goes to Loomis’ nurses house to get the information on Laurie so he can track her down. Along the way killing some folks.

Eventually Michael reaches campus, which is conveniently empty due to a field trip, and starts hacking his way thru anyone left. But why did he wait twenty years to come back? They do explain that he came after Laurie when she was seventeen and that is exactly how old her son is. So, I guess it is a family thing… if that is you wanted to murder them. Thanksgivings must have been hell growing up in the Myers house because Michael certainly does want to prune his family tree.

I like this movie more than I used to. That might be due to having recently watched four thru six. Seriously I hate those movies as they miss the point of the shape as a killer. Here Michael is back to being a mysterious killer who destroys anyone unlucky enough to get in his way as he pursues his sister. And yes, she is still his sister in this movie. The movie is rather short at under ninety minutes and no time is wasted as we get to some killing right away. There is a bit of a lull in the middle, but it picks up again when Laurie decides to go back into the school after seeing the kids off safely. She is done with Michael, and it is time to settle things once and for all! I liked that, though it would be done better later in the franchise. Though at the time it was cool to see the character shift from victim to aggressor in dealing with her homicidal brother.

The cast is great, and I was so happy to see Curtis return to the franchise and to horror movies in general. She is very good in the movie. It was also neat to see her mom Janet Leigh show up in a small role. Though she is onscreen long enough for an awesomely subtle Psycho easter egg. Familiar faces Adam Arkin and L.L. Cool J have supporting roles. But what is crazy are all the young actors that pop up in smaller roles. Joseph Gordon-Levitt, Josh Harnett, and Michelle Williams all appear. Then again it was Miramax and they seemed to be working with all the up and comers in the nineties.

I do have issues with Halloween H20. The kills aren’t very good. We do get a decent throat cut and a gnarly busted leg but most everything else is offscreen or after the fact. The skate to the face is a neat look, but you couldn’t show it to us? There is a call back to Halloween II as one character is stabbed and lifted in a very familiar way. But overall, it wasn’t awesome. I also know that some fans have issues with the mask, which is a couple masks and some CGI because they apparently couldn’t make up their minds while filming. To be honest I couldn’t really tell, but then I wasn’t staring at the mask every time it appeared on the screen. Finally, this is a bit nitpicky but there was I guess some issues with pulling audio from Halloween so they had another actor do a voiceover of Loomis’ famous monologue about trying to keep him locked up. I wish that they could have used the original audio because this annoyed me. It would have also been a nice way to acknowledge the actor that helped keep the franchise rolling when Curtis was off doing other stuff.

This is much better than the three that preceded it, though not great. Still if you are a Halloween fan or new to the franchise this is worth at least one watch. I don’t feel the need to go back to it as often as other installments but for the nineties its not too bad. Consider that a tepid recommendation from me.

Posted by Gutmunchers Lives at 1:16 PM