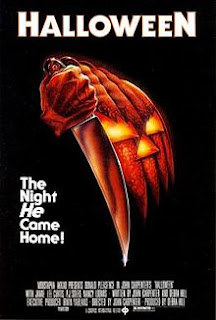 This is another of those movies that I feel a bit silly reviewing. Even the most casual of fans has to know about the original John Carpenter classic that launched the franchise. But since I’m doing a retrospective on the series, I figured it was necessary to preach to the choir just a bit.

The movie kicks off twenty years in the past where we see a teenage girl getting frisky with her boyfriend. He leaves afterwards, and someone sneaks up on her stabbing her do death with a kitchen knife. We quickly discover that it was her younger brother Michael, basically just a kid. Then the action shifts to the “present” or twenty years later. Dr. Loomis is getting ready to transport the now adult Michael for an evaluation to see if he can be released. Not much chance of that since according to the good doctor he has been starring at the walls for the last couple of decades. But when the car arrives to pick him up the patients are wandering around in the dark and Michael soon steals the car and takes off. Where is he headed? Home of course.

The rest of the movie is Michael stalking some random high school girls that happen to be babysitting kids on Halloween night, targeting one in particular. Her name is Laurie Strode and she had the misfortune of dropping the keys off at the old Myer’s house while Michael was hiding out. He literally went home you see. Loomis arrives in town and with the sheriff starts hunting Michael aka. the Boogeyman. After some deaths he finally starts chasing Laurie, but before he can get her Loomis shows up and Michael ends up dead… or does he?

Before anyone fires off an angry email about Laurie being Michael’s sister and that it wasn’t all random please stop. Remember that was added in Halloween part II so here it is all random and unexplained. I’ve always preferred that because Michael is much scarier when he doesn’t have a backstory. In this movie he is just the shape, an evil killing machine that doesn’t need motivation or reason. If you have the misfortune of meeting up with him, you die. That is way scarier so when I watch this one, I try and forget about the attempts later in the series to explain the character. Hell, the more they try and explain him the worse the movies get. 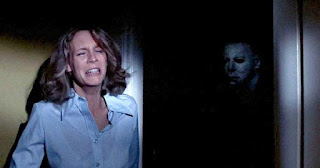 The lighting, camera work, music, and setting all work together to make Halloween as scary as any movie you will ever watch. Many of the fans have seen this one so much that they have become calloused to how great it is. There are scenes where Michael is in the background and we the audience can see him, but the characters can’t. Other times the characters do see him and then just as quickly he is gone. But my favorite bit is where he steps out of the shadows behind the Laurie Strode character with only the white of his mask being visible at first. These aren’t simple jump scares, but instead are creepy and set the tone for the action.

Many cite this and Black Christmas as the first slasher movies. I’ve never felt like the original Halloween was a slasher movie. It doesn’t have the in your face kills and gores that those movies feature. Instead the kills here aren’t as over the top and you don’t see knives or blood splashing everywhere. You get one simple stabbing and a couple strangulations. They are slightly disturbing when you realize this is likely how a serial killer would get rid of his victims, but it certainly isn’t the bloodbath that we would see in the slasher craze of the eighties. Halloween instead focuses more on the characters, especially Laurie and Dr. Loomis. Jamie Lee Curtis is great as Laurie and pulls of the horror of seeing all of her friends killed very well. But it is Donald Pleasance as Dr. Loomis that is most memorable. He basically steals every scene that he is in and has all of the best lines, both serious with his monologues as well as some funny one liners.

There is a reason that Halloween spawned a franchise. It’s a classic that caught everyone by surprise and became part of the culture. And while I don’t consider this a slasher movie it also helped spawn that phenomenon that dominated the nineteen eighties and beyond. This is a must see if you consider yourself a horror movie fan.