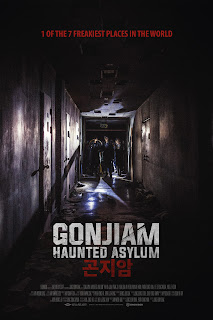 Let me begin things off with letting you all know that I’m not normally a huge found footage movie fan. Though I’ve been blown away by a couple in the past like As Above So Below, and The Bay. When they are done well, they are fun, when they aren’t it gets boring… very boring. But I have heard folks talking about this one for a couple of years now and thought I’d give it a chance.

This South Korean movie kicks off with some kids messing around in a supposedly haunted asylum. They apparently were live streaming because they disappeared and now a new online ghost hunting team is going to investigate the place. Though they aren’t supposed to be there and will have to sneak in. They meet up, horse around, walk thru the woods, go into the asylum, and run around screaming a lot. Along the way we find out that the internet crew is faking stuff to freak out their guests, they bring independent investigators along you see, until they aren’t faking it. The place really is haunted, and they have pissed it off! Unfortunately, the “Captain” of the program is so obsessed with clicks that it is far too late by the time they try to escape.

If you are a fan of found footage movies you may dig Gonjiam. It checks all the boxes including running and screaming, nausea inducing camera work, and lots of padding. People seen to enjoy this, but I don’t. The story here is paper thin and consists of people being assholes for money. That is why they go into the asylum and why they mess with the people they brought along as guests. We get lots of padding where they are eating supper, playing around in a car, teasing each other, and walking in the woods. This eats up about twenty minutes and is painful to get thru. I found it tedious. 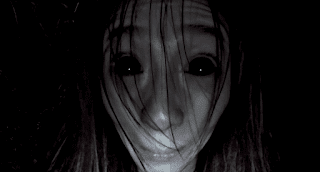 Now when they get to the place it does get creepy in spots. There are gags with arms getting yanked in boxes, scarves with a mind of their own, noises, a creepy doll, and lots of shadowy stuff happening in the background where the characters can’t see it. There are points in the movie where it is sort of scary and I can see why fans of this movie dig it so much. But in addition to how slow it was to start they keep going back to the well with these same types of scares which gets repetitive. The stuff doesn’t work the second or third time you try it. You have to give me something new to sink my teeth into if you want to keep my attention. Then again this just might be my innate dislike for the found footage genre speaking.

If you like this movie then I totally get it and won’t argue with you. Personally, if you are going to make a found footage movie you need to give me a real story that keeps me guessing. You know like any movie should have. Just saying. This is why I have said and will continue to say that this kind of flick enables lazy filmmaking cloaking itself in the “I want to make it feel real” spiel. Real life is mostly boring guys so give us something fun to watch. This was not it and I’m going to recommend everyone pass on Gonjiam: Haunted Asylum.

Posted by Gutmunchers Lives at 8:28 PM