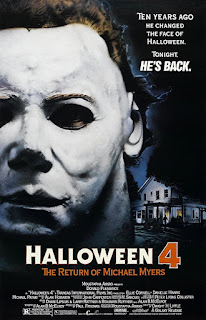 Six years passed between the release of this movie and the unpopular Halloween III Season of the Witch. After the backlash from fans the producers decided to bring Michael Myers back for more killing, but he and Loomis were the only ones destined to return… this time. And if I’m to be honest it is here that the franchise begins to take a horrible turn.

Ten years have passed since the events of first two Halloween movies. During that time Laurie Strode has had time to fall in love, marry, have a daughter, and die in a car accident. Clearly Jamie Lee Curtis’ career was doing well enough she had no desire to come anywhere near this one. It is Halloween and Jamie, the daughter, has been adopted and is getting ready to go trick or treating. See what they did there with the name? Well that is about as clever as they are going to get with this one. Michael Myers wakes up as he is being transferred and comes after her.

Wait a minute didn’t he and Loomis die? Nope they both survived the explosion so when Michael heads back to Haddonfield his is followed by Loomis. Along the way Michael takes out the phone lines and Loomis’ car. This is a very different Michael Myers from the early films. Here he has strategy and sets up his victims. By the time Loomis arrives in town the killings have already started. Jamie and her adopted older sister Rachel are the last survivors and flee town in a pickup truck full of well-armed locals. That isn’t as safe as it sounds.

I could keep going on with the plot synopsis, but I won’t. This movie is where the Halloween franchise starts going off the rails. In the earlier movies Myers was scary because he was the shape. He was a killing machine without any clear motivation. Just a screwed up human being that could take some punishment and clearly had the ability to ignore pain. He was the boogeyman. With the start of this movie they decided to make him something else. After ten years in a coma he sits up and has all of his strength. He knows right where Jamie is and how to get back to Haddonfield. Bullets don’t stop him, getting hit by a car doesn’t slow him down. He has become an unstoppable killing machine with supernatural powers.

Why do this? They were clearly watching the other big franchises like Friday the 13th and Nightmare on Elm Street, both of which featured a killer that you couldn’t destroy and that had supernatural powers. This copied it and in doing that tossed everything that made this franchise special. If that weren’t bad enough, they didn’t even do a good job at that. The script is awful and filled with plot holes and mistakes. First Michael appears to be able to be in a lot of different places at once. He has the time to kill everyone at the police station (again because he is now bullet proof…until he isn’t) and get to the power station to turn the lights off. All so he can almost immediately appear at the house where he knows that Jamie and her sister are at. 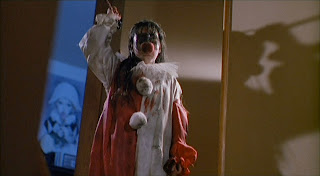 Come on movie you have to at least make some sense. They double down with him suddenly hanging onto the back long after they should have left him back in town. Of course, they had to do this to get the big ending where suddenly shooting Michael hurts him and knocks him down a mine shaft or whatever the hell that was. Then of course we get the big shock ending when it appears that Jamie has become the killer now. Considering they made the point of putting her in the same damn costume that Michael wore as a child when he killed his sister was it really a surprise? I did enjoy Loomis trying to shoot her… Donald Pleasence is awesome but doesn’t get enough screen time.

I should also mention that I found the kills to be disappointing. You get a finger to the forehead and a throat torn out, but everything else is just off screen or happens when the camera isn’t looking. If you are going to try and be one of the other big franchises, then at least give me some gore. I know that many horror flicks were getting neutered, but this is tame even by comparison to what the MPAA was letting slide.

This is a bad movie that I have managed to avoid watching for years. I had hoped that it might have aged well, but it didn’t. The only good thing that I can say is that Halloween 4 is better than the horrors that followed.

Posted by Gutmunchers Lives at 11:08 PM