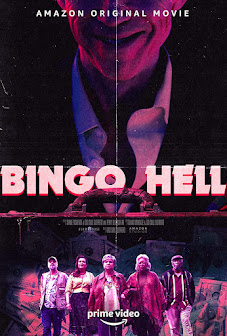 It must have been a couple of years ago when I watched a short film on Shudder called El Gigante about a man who wakes up with a Luchador mask on his head who is forced to fight for his life in a wrestling match. I enjoyed the heck out of it and it wasn’t until I started poking around Bingo Hell that I discovered that the same director, Gigi Saul Guerrero was responsible for this one as well. Needless to say I was excited to check it out.

The Oak Springs neighborhood has seen better days. The local economy is starting to pick up with hipsters moving in and starting microbreweries and coffee shops. But this leaves locals like Lupita wondering what is to become of their neighborhood. When a new Bingo Hall opens up or rather a new owner takes over an existing one things get odd. The prizes are way larger then they should be and the winners all end up dead not long afterwards. Soon the entire neighborhood is marked and playing the game in a catatonic like state. That is of course except Lupita, who grabs a shotgun and goes after Mr. Big, the creepy dude who runs the game. People die, the place is burned down, and Lupita learns a valuable lesson about community.

This is a very well made and entertaining movie. The story is filled with characters the audience can relate too and root for. Lupita is holding onto her memories and friends for dear life in the face of change. Things aren’t what they used to be and that makes her uncomfortable. I’ve gotten to that point in my own life where I can relate. I love it when horror movies take the time to have a story that connects beyond the monster is going to get us trope. Don’t get me wrong I dig that as well, I just appreciate good writing. The fact that Guerrero is able to tell this story on a lower budget is impressive. I can’t wait to see what she makes next.

The cast is great especially Adriana Barraza as Lupita. Here you have an older woman who legitimately feels like a bad ass. When she grabs the shotgun and goes off to save her friends and neighborhood it doesn’t feel forced or silly. This is partly due again to the great writing and establishing of the character but is also a credit to her performance as well. Lupita kicks much ass! Though for many fans the scenery chewing Mr. Big, played by genre favorite Richard Brake, is going to be the highlight. He is very good in the role, which is basically playing the same character he is in every genre movie I’ve seen him appear in. He does it very well, but it is also predictable. Not sure if that is a limitation with his acting or if that is all anyone offers him. The movie has a bit of gore. We get a woman tearing at her skin pealing it off, and a mechanic sticking his hands into a fan blade. That one is a bit gooey as the blood sprays everywhere. Though we only see the aftermath very briefly. The most explicit kill has a recovering addict getting his head stomped by Mr. Big. Again, this is a lower budget movie so I managed my expectations and enjoyed what they did give us.

I really enjoyed Bingo Hell and recommend that everyone give it a chance. This is the kind of quirky horror movie that can launch careers and become something to revisit every couple of years. As of the writing of this review it is streaming on Amazon Prime. Check it out.