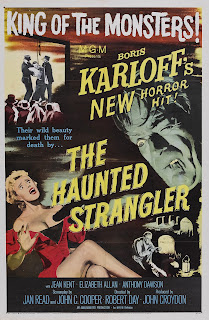 Boris Karloff stars in this movie about an author obsessed with solving the mystery of what he considers to be a man wrongly executed for murder. The movie opens with that man being executed while protesting his innocence. Twenty years later writer James Rankin, Karloff’s character, is digging into the details of the crime. This leads him to discovering that the medical assistant who did the autopsy on the executed man disappeared not long afterwards. Eventually he tracks the man to a mental hospital where he had escaped years earlier with the help of a nurse who had fallen in love with him! This leads to a missing knife that may be the key to the entire mystery. One that was probably buried with the executed man!

A bit of grave robbing later and Rankin has the missing knife. Though when he picks it up it appears he is possessed by the killer and goes on his own little killing spree. Is the knife haunted? If it is then why does it make him strangle people? Or is there something else happening? So many questions to answer but fear not because all is explained before the final credits roll.

Be warned that I can’t properly review this movie without some spoilers. If you like Karloff and want to check this out, then please do so. With that being said I’m about to get into the meat and potatoes of The Haunted Strangler. Here we go… This is one of the rare movies from Boris Karloff that I’ve never seen and I’m glad to have rectified that. I was really digging the plot and was totally invested in both the characters and story. The idea that the homicidal rage of a killer could be transferred from person to person thru an inanimate object like a knife was a neat twist. Imagine how disappointing it was when the movie abruptly changes gears in the third act! 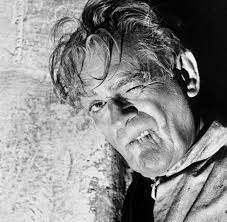 Instead of what the audience was led to believe there is nothing supernatural going on here. Rankin is the escaped mental patient and his wife the nurse who fell in love with him. He had been repressing the memories of his former life, but they eventually came to the surface in his need to prove the innocence of the man who was hanged. Why? Well because he was the killer in that case as well! I’m not sure if it was guilt or a need to get credit for the murders but Rankin subconsciously needed to prove they punished the wrong man. When he grabs the knife he wasn’t being possessed but instead just remembered who he was. I guess that is a twist of sorts, but I was liking the other story better and I’m not sure why they felt the need to switch gears and changed lanes.

Karloff is great as he normally is. Other than Targets his might be his best performance from his later career. He is both sympathetic as well as terrifyingly evil at times. The movie was a low budget affair, so Karloff had to fall back on an old trick to make his character look different when he was the killer. He basically popped out his dentures and pulled in his cheeks, which was surprisingly effective. The rest of the cast is solid and do a decent job. But really this is Karloff’s show, and he carries the movie with his performance.

Not to beat a dead horse but I didn’t like the twist to the story. That said I think that Karloff’s performance saves The Haunted Strangler for me. He is so fun to watch that I can see myself popping this one back in for another watch. If you get the chance and want to see something different check it out.