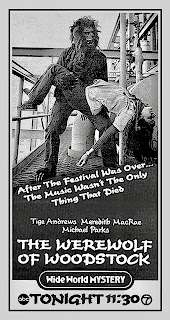 Damn I found another batch of made for television movies that I’ve not seen before. The first on to jump off the page at me was The Werewolf of Woodstock. Set days after Woodstock left the surrounding countryside wrecked and full of garbage an angry farmer runs outside in a storm. Running onto a stage he grabs a live wire and is electrocuted. He survives and is next seen laying in his bed covered in bandages. Then we get to see a group of hippies headed to Woodstock to record their demo tape. Mostly just as a gimmick to say that it was recorded at Woodstock.

Here is where things get weird… or maybe even weirder! The farmer turns into a werewolf because he was electrocuted and because he hates hippies. I’m not kidding here folks; this is the story. He runs around, kills a cop, attacks a hippy, kidnaps a girl, steals a dune buggy, and is chased down by an L. A. cop who was visiting. How do you kill a werewolf that was created with hatred and electricity? With of silver bullet of course.

I loved this movie. From the farmer raging out and yelling, “You miserable freaks!” to the dune buggy carjacking The Werewolf of Woodstock gave me stuff I’ve never seen before. The story, while absurd, is fascinating to watch unfold. Leaps of logic come from nowhere, like the fancy lady psychiatrist going immediately to werewolf. What rational person would jump to that conclusion without any evidence? The answer is a character in this movie! The dialogue is very seventies with lots of “lay it on you mans” and “enough bad karmas” to make any of you groovy cats happy. There is a lot going on here which is why the time flies right by. Before you know it the silver bullet brings down our hairy hippie hating predator! The cast of this movie is insane. Two of the hippies are played by Belinda Belaski (Food of the Gods, Piranha) and Andrew Stevens (Day of the Animals, Vigilante Force). These are early roles for both but the talent is obvious. We also get the amazing Michael Parks (The Savage Bees, Planet Terror) as the visiting L.A. cop. If that isn’t enough Robert Dix (Satan’s Sadists, Five Bloody Graves) has a small part. Basically, this is the last role he would have, though he did something right before he passed away forty three years later.

There is an odd look to Werewolf of Woodstock. It was shot on tape like the soap operas of the day, so the image quality is not great. It feels very much like a Dark Shadows episode. I know that some people are turned off by things like this, but it doesn’t bother me as much. Still, I thought you should be warned. The werewolf is basically a guy in a mask and furry gloves. Cheesy as hell it works for this movie and is fun to see on the small screen.

Do I recommend this movie? The werewolf carjacks a dune buggy so hell yes! I miss goofy and weird seventies television movies like this. They don’t make them like Werewolf of Woodstock anymore and that is a damn shame. Track this one down and check it out. You won’t be disappointed.

Posted by Gutmunchers Lives at 3:30 PM