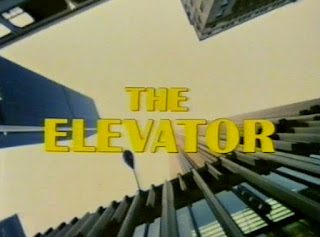 This made for television movie was one that I had been pursuing for many years. It was strangely hard to locate but eventually it popped up on YouTube, so I jumped on it right away. Why was I so interested in this one? Not only is The Elevator one of the ABC movies of the week, which I’m determined to watch all of them, but it also stars Roddy McDowall. This movie checked a couple boxes for me.

The story happens in a high-rise building where we meet several folks. They are all going about their business when the crowd onto an elevator. One that is also moving a very heavy safe from one office to another. This is important because they really should have used the freight elevator. The extra weight being pushed off causes it to fail trapping the passengers between floors. This is further complicated by the supports failing threatening to plunge the car thirty floors down! Oh and one of the people doing business that gets trapped is a claustrophobic armed robber who starts to lose his mind!

The rest of the movie is them trying to get off the elevator before it is too late. The robber’s partner, who didn’t make it on the elevator creeping around the building trying to get the money and probably save his friend. But he certainly wants the money! During his attempts to spring him he ends up shooting a security guard which brings the cops to the building. Lots of stuff is happening in this one.

You may be asking yourself “John why are you covering an almost fifty-year-old made for television movie that most everyone has forgotten about?”. That is an excellent question and I’ll answer it for you. Here we have a movie that has very few locations and next to no action. Instead it relies on a well written script executed by an amazing cast. This is far harder to do then you think and shows a care that has been lost in our reality television dominated world. The story while simple pushes a lot of buttons. There is the claustrophobic setting of the elevator, the danger as they could all die at any moment, and the wild card of the gun toting partner sneaking around the building. I found myself interesting and engaged for the entire brief seventy minutes it took for things to play out.

The cast is top notch. James Farentino is excellent as the panicking robber caught on the elevator. He sells the irrational fear with an at times manic performance. He really does seem terrified, which explains his later irrational behavior. Don Stroud is menacing as the other robber who is all about the money and doesn’t care who he has to kill to get it and/or cover his tracks. I mean the dude tries to cut the cable and kill all the other people trapped on the elevator because they saw his partner. Myrna Loy is great and brings her talents to bear in a surprisingly sad story arc that isn’t resolved and sort of is a bummer. Roddy McDowall is his stellar self and is given a nice monologue where he resolves to quit his job if he lives. Again, this has a strange payoff in the end. Carol Lynley (The Night Stalker) and Craig Stevens (The Deadly Mantis) also have roles in this one. Clearly, they didn’t skimp on the talent.

The care and effort put into The Elevator is a reminder that the networks, cast, writers, and directors used to care about what they were doing. This was admittedly shot to fill a couple of hours on the schedule and then play once or twice in reruns before disappearing into the network vaults. But that didn’t matter, and everyone involved did their best. That alone makes this worth checking out. And of course, we have Roddy McDowall and I’m determined to watch everything he was in! If you can find The Elevator, I’d recommend giving it a chance.