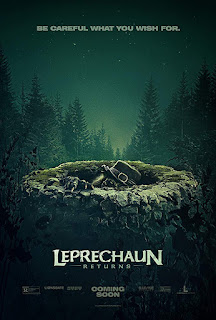 After many less than stellar sequels and an abomination of a movie attempting to retell the origins Syfy channel decided to take another bite at the Leprechaun apple with a direct sequel to the original flick as an attempt to ignore all the other sequels and prequels. It worked for Halloween so I suppose it could work here.

We are introduced to our main character, Lila, as she waits for her ride to pick her up. She has just transferred to a new school and joined a sorority that is fixing up an old house and trying to live off the grid. This has something to do with being green or that sort of thing. It is mentioned but isn’t important to the story other than to place the characters at the isolated house. What is important is that the house is the same one that Lila’s mother used to own. Yeah, she is the daughter of Jennifer Aniston’s character from the original movie.

As you would expect the girls end up disturbing the resting place of the Leprechaun and he returns in a most explosive way. The only recurring character is that of the handyman Ozzie, played again by Mark Holton, who unfortunately gets a bit of Leprechaun goo on him and ends up becoming his portal. The Leprechaun basically bursts from his stomach bringing that gold coin that I suppose has been in his colon for twenty-five years. From that point on it is a series of kills as the college kids are picked off by the angry little bastard who just wants his gold back. Though I suspect he would kill them even if he did get it.

Honestly, I had very low expectations when I sat down to watch this one, but it is a Leprechaun flick so I’m going to soldier on regardless. This is pleasantly and surprisingly decent movie and one of the best I’ve seen from the franchise in years. The story is well constructed and wastes little time establishing the characters before unleashing the mayhem on them. I liked how they tied this into the first movie without making it feel forced or awkward. Clearly Jennifer Aniston wasn’t going to return for another low budget horror movie but choosing Ozzie as the bridge was inspired. In many ways he was the best character if not the actor with the best career afterwards.

The new characters/cast are all really good. There is some talent here in front of the camera and it is clear they are all giving it their best effort. That doesn’t always happen with a flick like this, so I appreciate it when I see it. The biggest concern that I had is the recasting of the titular Leprechaun as Warwick Davis wasn’t returning to the role. This wasn’t the filmmaker’s fault as Davis just didn’t want to do this movie. Still his performance was the reason that the sequels kept getting made so those were some big shoes to fill, pun not intended. Linden Porco does a wonderful job in the role and is every bit as snarky and funny as Davis was in his many times playing the character. This is clear early on and once I saw that I relaxed and kicked back to enjoy the craziness.

Leprechaun Returns really is a crazy movie, especially considering it was made for T.V. The kills are cleverly staged and executed with practical effects work. In addition to Ozzie’s demise, which is fantastic and all onscreen. We get some gems like death by water sprinkler, a mail truck head smashing, death by drone, and another character is “awarded” their demise. Though my favorite kill in both execution and creativity is the death by solar panel gag. There is a lot to like here and I’ve not even mentioned the creature redesign of the titular character. Spoilers they do a fantastic job with that as well.

The next time you see a reboot or re-imagining of an old favorite of yours think about what could be. With a little bit of creativity, you can make a sequel and if things are too muddied you can ignore it by making it a direct sequel and sort of resetting things that way. If you make a good movie like we have here, then the fans will embrace it. If you haven’t seen Leprechaun Returns, then I highly recommend you correct that right away.

Posted by Gutmunchers Lives at 9:08 AM