note: This was an article that I wrote for Grindhouse Purgatory. I thought it might be fun to post it here as a Throwback Thursday. It covers both the movie as well as the special features and if it is worth upgrading from previous releases.

The Blu-Ray Report: Lord of Illusions 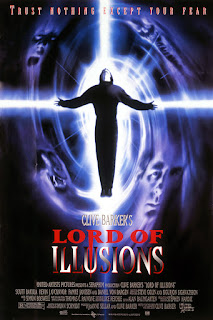 Well this pandemic shit is still going strong as I sit here afraid to go outside and be around human beings. Though to be fair this isn’t necessarily that unusual for me. What really hurts though is not being able to go to conventions, concerts, and the movies. These are things that I’ve always taken for granted and now miss that they are gone. But I’m sure that by the time I’m working on my contribution to the next issue this will all be behind us… I think I might have said that last time. Well enough bitching let us get to the reason we are here.

After a couple of tribute issues here at Grindhouse Purgatory I’m back to reviewing regular old Blu-Ray releases that I’ve picked up. For this issue I thought it was time that I finally tear into the Lord of Illusions disc that I picked up. Directed by Clive Barker from his own script based on one of his short stories and starring one of my favorite television actors Scott Bakula it has been years since I’ve seen it. I’m not only excited to check out the movie, but there appear to be a nice batch of special features on the new Blu-Ray as well.

The story is part Film Noir detective tale and part horror. Things kick off with a bang as we see a group of cult members returning to their former compound to stop the cult leader, a man named Nix. He has apparently “gone to far” and kidnapped a young girl for some nefarious reasons. There is a shoot out and the leader of the returnees, Swann, uses some special tools to bind Nix stopping the danger to both the girl and themselves. Or so you would think.

The action moves to thirteen years later where our main character, detective Harry D’Amour, is sent to Los Angeles to keep tabs on an insurance fraudster. While trailing him Harry stumbles over a crime scene where a palm reader has been tortured and is barley hanging onto life. After fighting off the crazies who were responsible, he is told by the dying man that he has a destiny and that he is drawn to the darkness. We know this to be true since we were clued in earlier that his last case had involved an exorcism. Clearly, he is not scared off by the spooky stuff.

His presence at the crime scene brings him to the attention of Dorothea Swann, wife of the man who we saw earlier stopping Nix. She is concerned about her husband and offers to hire Harry to check on him. This leads him down a rabbit hole of magic, murder, cults, and perhaps love. Many bodies hit the ground, some sinking into it, and secrets are revealed before the end credits roll.

As I’ve already mentioned it has been years since I’ve watched Lord of Illusions. This was a frequent watch on different premium cable channels back in the late nineties, but I’ve never seen it quite like this. For the review I decided to check out the director’s cut, which clocks in at just over two hours long. I highly recommend that this is the version that you watch if you should happen to pick up the new Blu-Ray. It adds some great background and spends more time on the investigative parts of the story. We get to see Harry working on the case and connecting the dots in a much more logical way. The theatrical version seems to jump around more without these scenes.

Of course, that might also make the movie feel longer and I know that many fans I’ve talked to over the years find Lord of Illusions to already be a bit slow. While I don’t agree with them, I totally understand that if you sit down to watch this as a straight horror movie then you might be disappointed. That is why I keep mentioning the film noir and detective bits of the story. If you like that sort of thing then I believe that you are going to dig this movie. We even have a femme fatale as well as a villain and henchman continually roughing up our hero. This is very cool stuff if you are in the right frame of mind. 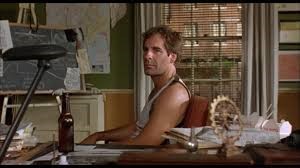 The cast Barker assembled is great. We get Famke Janssen as Dorothea Swann, Vincent Schiavelli briefly as a rival magician, Kevin J. O’Connor portrays Swann, and finally Scott Bakula in the role of Harry D’Amour. This is an early role for Janssen, but you can already see the talent she would show later on. The casual fan might not recognize Schiavelli or O’Connor by name, but I promise you that you’ve seen them before. Bakula is best known for his television work but is excellent in Lord of Illusions carrying much of the movie with his performance alone. This is a great ensemble cast without a single weak link. Fun little note that Janssen and O’Connor would star together three years later in another classic nineties flick, Deep Rising.

The special effects are a mixed bag for me. The practical effects are stellar and include a lot of kills. People get run over, stabbed, faces get melted, and a stage prop is rammed thru someone’s torso. These are just a few of the highlights. We also have people melted into the floor, a nice hand slash, a couple gags where someone reaches thru the skin to bury their fingers in another’s head. I have zero issues with this.

Unfortunately, the digital effects work doesn’t hold up well. There is a reoccurring gag where the magicians can turn themselves into what Barker calls origami, basically they are folded up into geometrical shapes on screen. This hasn’t aged well and looks horrible, especially with the movie now being presented in high definition. We also get some lighting and fire effects work that also looks bad. This is really my only complaint about the movie.

I’m not going to allow that one flaw to scare me away from recommending Lord of Illusions. I think it is an interesting story, one that no one had tried to tell on film before. Barker’s vision and inspired casting choices make this a movie that you should see at least once. This is especially so since you have read this review and have an idea what you are getting into.

This article isn’t just a review of the movie, but also a review of the new Blu-Ray as well. Here is where I normally tell you if it is worth double dipping on the new disc. This is going to be hard for me to determine because I’ve never owned a copy of Lord of Illusions before buying this release. Remember I used to watch it on cable, so I never got around to buying a VHS or DVD of it. I’ve got nothing to compare it too. But I can still let you know what else is included and you can decide if it is worth it.

The Scream Factory release is a two-disc set with both the theatrical as well as the directors cut of the movie. So you get both versions, which is sort of cool. The transfer is top notch with both beautiful picture and sound. I think that the transfer alone is likely to be worth the purchase. If that doesn’t rope you in, we also get a director’s commentary from Clive Barker that is fascinating. I honestly could sit around listening to that guy talk for hours.

Other features include a vintage making of called A Gathering of Magic that clocks in at eighteen minutes. Don’t get too excited as this is an old feature that was shot as they were making the movie. If you are “vintage” like me then you have probably remember that HBO used to show stuff like this for releases that they knew they were eventually going to get. It is less informative and more of a teaser. We also get three minutes of deleted scenes that feel like they should have been cut, so nothing special there. There is a couple of minutes of behind the scenes footage that also looks as if it was left out of the Gathering of Magic featurette. 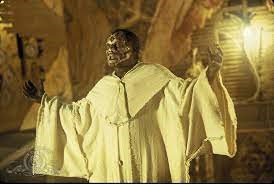 The only new thing on the disc was an interview with the storyboard artist. This was interesting as it explains how Barker shot the movie very close to what was on the storyboards, thus saving time and money. The artist, Martin Mercer, also explains how his job helps the director bring their vision to life. It was a fun way to kill twelve minutes and I learned something new about movie making. Other than the commentary this was the highlight of the extras included on the disc.

If I’m going to be honest, I’d have to say that the special features were disappointing. I expected that as Lord of Illusions has a small following and is nowhere near as popular as Hellraiser or Nightbreed. But still I had hoped for a bit more love for the movie. I’m sure they could have gotten Scott Bakula or Kevin O’Connor in for an interview. Either or both of those would have been a killer addition.

If we take the release as a whole, I’d recommend it solely on the transfer and the director’s cut. While I don’t know if the director’s cut was available before I do know that this is a new transfer. If like me, you haven’t seen it for years, or perhaps wanted to check it out for the first time this is the way to go. Just remember to spend the extra half hour to watch the director’s cut of the movie.

As I’ve mentioned in the past, I’d like to thank Pete for giving me the chance to write for such a great magazine. Grindhouse Purgatory is something that I’m proud to be associated with. Thanks also to all of you out there that buy the magazine and occasionally drop me an email to tell me I’m an idiot or that you agree with me. Speaking of email that address is gutmunchers@gmail.com and I’d love to hear your thoughts on Lord of Illusions as well as anything else you want to shoot the breeze about. I’ll see you all in six months and remember to stay safe out there. Shit is getting weird.