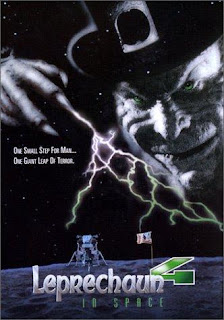 It is about to get weird up in Crappy Movie Reviews. I knew when I decided to tackle the Leprechaun series that I would do them completely out of order. But Leprechaun in Space couldn’t wait. Yeah, the little green bastard ends up doing his thing in the stars and battles with some space marines “Aliens” style! Might as well get right to the good stuff…

A ship is dispatched to a planet to deal with a monster that has been terrorizing the galaxy. That monster is the Leprechaun who is up to his old tricks. Not only is his planet full of gold, but he has also kidnapped a princess so that he might convince her to marry him. I guess the green fella wants to be a king as well as rich! The military types transport down and do battle with him which ends up with the princess injured and the Leprechaun in pieces. Well, I guess the movie is over after ten minutes. Of course it isn’t!

One of the marines decides to pee on the bits of the Leprechaun. That allows him to hitch a ride back in the man’s… well you can probably figure it out. Once he “escapes” in a very uncomfortable scene the rest of the movie is the Leprechaun fighting it out with the marines on the ship. Though he tells them that if they would only give the princess back he promises to leave them alive. But then after watching four of these movies I can see why the characters might have trust issues. Crazy stuff happens, lots of characters die, we get some mutations, and a giant Leprechaun! Good times are had by all.

This is one of those movies that I sit down to watch with limited expectations. It is very low budget, has a completely goofy plot, and is filled with questionable special effects. While I think that the first couple of entries into the franchise are decent flicks, this one is where the franchise starts to get silly. I know that annoys some fans, but me not so much. While I agree that Leprechaun 4 has issues the core of why I watch and enjoy these flicks is still there. Let me explain.

Warwick Davis is great again in his role. His wisecracks are spot on and pretty much every attempt at humor hits the mark. The movie spends a lot of time focused on him, which is great. Regardless of budget as long as they give him screen time these movies work for me. The guy can act, has the charisma to carry a scene, and knows exactly how to play the character for laughs while still being scary. Though honestly, he really isn’t that scary here. I thought that casting genre regular Miguel A. Nunez was another fantastic choice. He also is fun to watch and helps to carry the scenes with the marines when the Leprechaun isn’t killing them. He also handles the silliness of the material well delivering his one-liners with skill and timing.

We get a lot of bad CGI when it comes to the spacecraft and when they land on the planet. But I’m okay with that as long as they get the creature right. The makeup effect work on the creature is again handled by Gabe Bartalos and it looks great. The one thing that would have made me hate Leprechaun 4 is if they had screwed up on the creature effects. Davis looks as cool in this movie as he has in any of the earlier entries so good job guys.

Be warned that I like cheesy flicks and Leprechaun 4: in Space falls squarely into that category. If you are looking to watch a serious horror movie this isn’t for you. With that in mind I recommend it.

Posted by Gutmunchers Lives at 3:35 PM