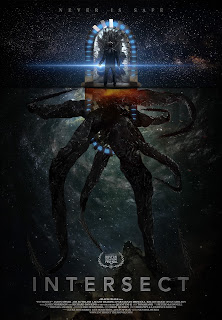 This movie opens up with a camera zooming thru a strange alien world before stopping on some kind of creature. Then the camera pulls back, and we see a man standing over an injured woman. She tells him to remember and then dies. Immediately after that we see the same couple, Ryan and Caitlin, in bed together. Are you confused yet? If not, you will be. As the story unfolds it becomes obvious that it is being told out of order and jumping around. This I suppose was thought to be acceptable because this movie is about time travel. I’ll talk more about this later.

Be aware the next paragraph is choked full of spoilers so you may not want to read it. But honestly, I’m not going to recommend spending two hours on this movie, so I don’t feel bad about sharing. You have been warned. Thru a tedious two hours of jumping around, including an extended time spent with Ryan, Caitlin, and the third member of their little group Nate we find out one very important thing. There are creatures from another dimension that want to enter ours. To that end they have been filling Ryan’s mind with all sorts of formulas to help him build his time machine. They also have others they are influencing to manipulate a terrorist attack to rip open a portal to our dimension.

I could say more but I won’t. Intersect is trying very hard to be clever and I’ll admit that they do have some interesting twists in the story. But each and every one of them is so utterly predictable because as a science fiction fan I’ve seen it done already. In most cases much better than we get here. There are also things that seemed forced. Like Ryan mysteriously not remembering his little sister because… trauma. That is convenient because it allows him to block out the memory of the time traveling Nate who accidentally kills her. And the fact that his own adolescent self grabbed a gun and shot him. 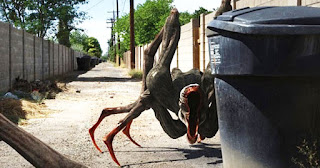 That is what is wrong with the writing here. They are so enamored with trying to be smart that they end up chasing their tails and taking the audience with them. I think this is also the reason that the damn movie is almost two hours long. This was already a very dry and action less tale so this kills any chance they might have had to entertain. I mean did we really need the subplot explaining that the guy with the bomb was their bully from elementary school. Was it that important? No, it wasn’t. I have more examples, but I think you guys get the point.

There are a few decent CGI generated creatures, but this is inconsistent because at other times the effects aren’t very good. It is also clear that they were trying to reuse shots to get the most bang for their buck. I won’t complain too much about this because sadly we don’t really get many creatures. This plays more like a drama or pre-teen soap opera than it does science fiction. And don’t get sucked in like I do with the hinting of Lovecraftian creatures. There are some references for sure, but they don’t give us any creature related payoff.

In the end this movie is a total misfire for me. I’m a science fiction fan and aren’t afraid of movies that make me pay attention and think. But there is no payoff. Oh, and somehow yet again we have an independent filmmaker showing their characters watching Night of the Living Dead. Seriously stop showing me a much better movie in your less than stellar flick. I suggest passing on Intersect.

Posted by Gutmunchers Lives at 9:20 AM