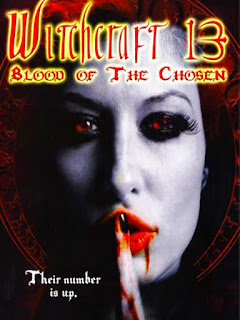 These movies are getting so bad. As much as I’ve complained about it the only thing that the series had going for it was the softcore sleaze. The last couple entries including this one can’t even get that right. Instead, all it has to offer is the same story executed even more poorly than it has been done the eleven times before. Let me explain.

William is back again and has also been recast again. He is hanging out with his warlock buddy, because I guess there are good ones now, who helped him win a case. I think that is why he is dropping off some money for him. I say I think because the sound is terrible in this movie. Worse than it ever was before as I couldn’t hear at least half of the dialogue. That isn’t an exaggeration for the longest time I had no idea what the hell was going on. So anyway, he gives him an envelope of cash and then his pal leaves with a lady. A lady who rips out his heart when they are alone. How rude is that?

Now William is on the case and after arguing with some generic cop characters, thankfully no more Lutz played by Stephanie Beaton, he uses his warlock powers to see stuff. Not sure what because it makes no sense. But then he trails a cute blonde girl, and they get friendly. Of course, she is bad, but what can you do because she is hot. She tries to kill him but fails. Then William meets a sister looking for her brother who is obviously a bad guy too. There is some nonsense about if he, as the chosen one hooks up with the big bad evil leader their baby will rule the world for evil. 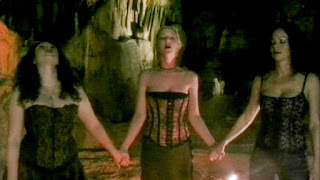 You know she is the leader, and they get frisky. Somehow William the all-powerful warlock is clueless of this fact. If I’ve learned one thing from the Witchcraft series, it is that if William would only pay attention the world would almost end a lot less often. So, there is this cave where the evil heart stealing ladies are chanting, and William crashes their “lets summon the big baddie” party. Some CGI pew pew pew happens, and we see that the sister is actually the big bad. Which of course we already knew that. But it is a shock to old William. She is also preggers with their child who is again going to rule the world. The big twist is that she is really William’s long lost sister… um gross.

The cops show up and shoot some folks and William does battle with his pregnant girlfriend/sister. This leads to some more CGI pew pew pew and he gets frustrated when she tells him he can’t stop her because he is basically a big wuss. That was probably a mistake as William gets pissed and rips out her heart! He also chews on it to take her power. No more sister or evil world ruling baby to worry about.

The music, acting, editing, sound, plot, dialogue, and everything else about this movie sucks. Thirteen movies in I’m done trying to be clever and repackage the same damn review for the same damn movie. Skip this one like all the rest. Of course, there are still three more for me to watch.

Posted by Gutmunchers Lives at 4:17 PM