Ever since I reviewed Full Wolf Moon, I’ve wanted to check out more stories with Child’s Dr. Logan character. Like I mentioned in that review the character is the main protagonist in three of the five books that he appears in and a supporting character in two. Terminal Freeze is one of those where he is just there to move the story along, but it is what I found in my local used bookstore, so I figured why not.

Our main character is Evan Marshall who is part of a team studying the effects of Global Warming. While working at an isolated decommissioned military station in Alaska he and the others discover a strange creature frozen in the ice. It is then that the reader finds out that their funding came from a production company that was hoping to make a documentary out of their findings. Well this creature is a sensational discovery and soon the base is filled with a production crew that nearly overwhelms the scientists and the skeleton crew of soldiers who serve as caretakers of the facility.

Thru greed and hubris, the creature is pulled out of the ice and plans are made to thaw it on live television. Before that can happen, it unfreezes itself and wakes up. The prehistoric killing machine was alive in the ice! The bodies begin piling up while the survivors try to figure out how to destroy the thing. Bullets bounce off of it and electricity barely slows it down. This is further complicated by the fact that anyone near the creature feels an unbearable pressure in their heads and suffer overwhelming fear. 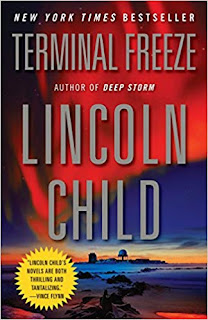 I’m not going to spoil the ending so that is about all I’ll say about the story. What I can share is that Child again gives the reader a fast paced and engaging book with interesting characters that have depth. Some you can root for and others end up getting what they deserve in gratifying ways. There aren’t any real twists as the plot follows the expected formula of monster is found, people get killed, and eventually it is destroyed by the hero. The only thing that might pass for a twist is a little story from Dr. Logan where he gives an alternate theory of the creature’s origins. Not really a twist but a clever last minute what if from the author.

I have to mention one thing that as a fan of classic science fiction movies I noticed and loved seeing in the book. At one point the characters think that electricity is the only way to kill the creature so they setup an elaborate trap for it. The plan includes a metal plate on the floor and a narrow hallway next to power station. Again, these characters are trapped in an isolated military station surrounded by the hostile frozen landscape. All I can say is that Child must have seen and been a fan of The Thing from Another World.

I finished Terminal Freeze over a couple of days and enjoyed the heck out of it. Consider this one recommended. Now please excuse me while I head off to dig thru the stacks of my local used book shop looking for more goodies. Seriously I’m leaving right now to do so.

Posted by Gutmunchers Lives at 10:18 PM