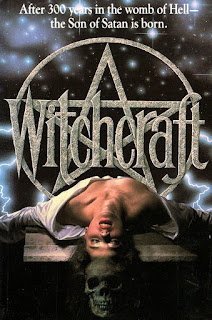 The promised Witchcraft review marathon that no one asked for is here. The movie kicks off with a young woman named Grace giving birth while we also see a couple from the sixteen hundreds pulled out of bed and burned at the stake. I wonder if these two plot-lines separated by three hundred years will somehow connect? Maybe…

Grace’s husband John takes her to live with his mother, Elizabeth. He insists that it is only for a week while she gets on her feet. Though things start to get weird almost as soon as she arrives. John becomes distant and his mother becomes very protective of the baby. There is also a creepy mute butler named Ellsworth and Grace’s friend Linda. When Grace invites her priest to bless the baby it doesn’t go well at all. He pukes and eventually hangs himself in front of her.

What the heck is going on? Well spoilers are coming so be warned. John and Elizabeth are the returned spirits of the couple we saw burned at the stake. They have returned and are here to claim Grace’s baby as their own. It seems that she was pregnant when they were torched. At some point they get very homicidal and start killing people, though I don’t know why they waited. But when they get rolling things do get bloody. This all leads to a final conflict where an unlikely hero saves the day. Yeah, it is totally the creepy mute butler.

This isn’t a great movie, but it also isn’t awful. It falls in that dreaded category of boring and mediocre. The story is derivative, which is a nice way of saying rips off, Rosemary’s Baby. Seriously you even have the random old people eating in closeup while talking about the child. Now they aren’t part of the plan, but I’ve seen that scene before. Sadly this cast, while giving it their all, isn’t nearly as talented. I wasn’t interested in their performances or characters at all. Since almost the entire movie takes place inside the house that makes for a very slow pace that had me looking at my watch more than once. 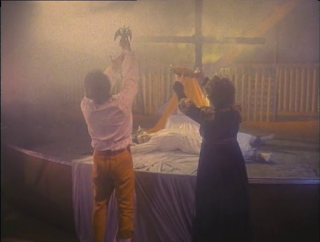 This is also a strange flick to watch. At times the camera moves around and is interesting. I notice that sort of thing, especially when nothing else is happening of note. Then at other times it is set in one spot and we just get quick cuts and closeups as characters speak. It feels like there were two different cinematographers shooting this thing! Lighting is also an issue. Despite being shot in 35mm it looks cheap. I’m not sure if they meant to suck all of the color out of the interior sequences but they did. The musical cues were cool at first but then get used way too much as things progress. After a while I was annoyed by the synth soundtrack that kept hammering away. It also kills any tension that Witchcraft might have built up.

After the burning at the stake early on it takes a while for us to get any kills. We do end up with a respectable seven deaths with a couple of highlights. There is a nifty stabbing with the blade exiting the mouth and a beheading that looks nice. There is also a decent melting down of one of the witches. Though the best gag is the boil covered priest hanging himself. Overall the kills on what is clearly a low budget were the highlight of Witchcraft.

I’ve seen much worse… so much worse. Either this franchise has gotten a bad rap or I’m in for some miserable movies. While I don’t recommend this movie I can’t totally dismiss it either.

Next up Witchcraft II: The Temptress

Posted by Gutmunchers Lives at 10:26 PM