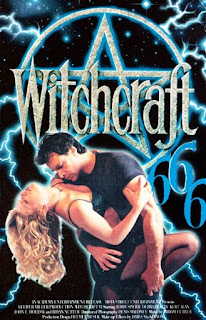 Here we have a threat to the world in the form of yet another evil warlock, this time named Savanti. He has a couple of minions running around kidnapping girls to become the baby mamma of the Devil. I believe they are looking for a virgin, but I’m not sure. When it doesn’t work, they dump the bodies, and the cops find them. So, they think there is a serial killer running around. This is how we meet our cops, Lutz and Garner.

Somehow the inept pair figure out that there is a supernatural twist to the killings and go looking for an expert. Guess who that is? Yep, William is back, this time played by another new actor Jerry Spicer. Stuff happens, slowly, and they eventually track down the evil warlock and his crew but not until they kidnap William’s secretary who is a recent graduate of Holy Trinity College and you guessed it… a virgin!

Here we are at the sixth installment and I’m beginning to wonder if they weren’t making these things without worrying about plot and characters on purpose. These aren’t getting any better and you would think that they might make a passable one on accident. The only explanation is that this is the kind of movie they are trying to produce. This is the same basic story as most of those preceding it. The one added twist are the police, who act as comic relief. Though the scripts idea of jokes is having the cops ask for doughnuts over and over again while Garner says sexist stuff and ogles at women. The plot also has a greatest hits of dumb movie tropes. For example, the police captain that yells at his underlings. It also repeats plot points from earlier movies like having the bad guy send a woman to seduce William as that is his weakness. You would think that wouldn’t work the second time around. Then again, the part was recast so maybe he hadn’t watched the earlier movies. I’m beginning to wish I hadn’t. 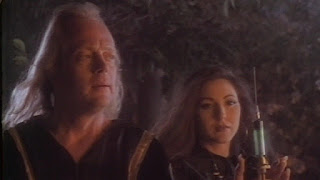 The movie is also filled with padding stretching out shots of people driving, drinking, and taking a bath. We also get several extended naughty scenes with lots of skin that go on far too long and repeat the same shots over and over again. Though the worst waste of time is when the cops interrogate all the weirdos to try in an attempt to drum up leads. This means we get a parade of bad actors acting badly with awkward dialogue that again I’m thinking was supposed to be funny but isn’t.

So, was this supposed to be a comedy? I certainly hope not because it isn’t funny. It also isn’t much of a horror movie. We are back to lame kills that mostly happen off screen and number less than three. At least part Dance with the Devil game me something. We also get a generic ‘90s soundtrack that is okay but is loud at times. The audio issues with dialogue hard to hear in some scenes pops up again as well. New movie same flaws. I can’t recommend Witchcraft VI.

Next up Witchcraft VII: Judgement Hour