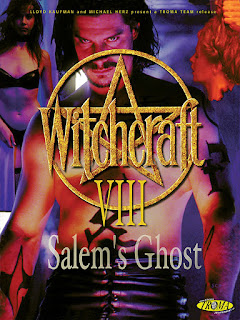 With William dead what direction are they going to take the Witchcraft franchise? I guess the answer to that is sort of a haunted house story. After an opening sequence set three hundred years ago where some locals in Salem, yes that Salem, bind a particularly nasty warlock named Simon to a resting place with a magic cross. Then we come to modern day mid-nineties to see a couple, Sonny and Mary Ann, moving into their new home. They putter around a bit before a neighbor visits and in an effort to help starts to take down a basement wall.

Guess who is buried in the basement of the house? If you guessed the warlock, you win the prize. The prize is not having to watch Warlock VIII. Some crazy stuff happens including the furniture coming alive and flying around the room. Eventually a witch hunter from the Church of England shows up to save the day. Only he seems a bit lackluster and ends up stuck on the front lawn. Though he gave Sonny enough information to eventually put Simon back in his eternal prison. Though how are they going to explain the body on the front lawn?

I’ve been trying to find the positives with these movies before explaining in detail why you shouldn’t watch them. Though for the last movie I didn’t even make the effort because there was nothing good. I’m going to be a bit kinder to Salem’s Ghost. Now that they are free of the William character it seems that the writer had some fun. There is an actual plot here with some meat on the bone. Don’t get me wrong there are still pacing issues, more on that later, but at least there is something happening in this one. I liked the witch hunter character, and the crazy neighbors were sort of amusing. In past reviews I’ve accused this franchise of not having a script or story, here we do get one. It isn’t great, but that is still a huge improvement. 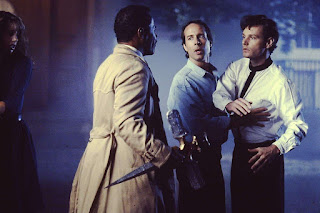 There is some gore, but on a budget. The opening when they burn Simon after stabbing him in the heart with the magic cross is pretty neat. Cheap but I give them an “A” for effort. There is also a character getting run thru with a lightning rod and another ripping his own face off. Again, this isn’t top notch stuff but it’s better than nothing, which this franchise has done in the past. The music is also more interesting with a chanting/singing soundtrack that gives it a bit of a religious vibe that works with the story. This is a vast improvement over the generic noise we have been subjected to in previous entries.

Now you may be thinking that this is a good movie. It isn’t but it also isn’t awful. It sucks but a mediocre movie in this franchise is a star! We still have pacing issues, there is still some padding, they do like their naughty scenes, and other such issues. But here it’s just not as bad as before. I wouldn’t recommend this movie unless you are bound and determined to check out a Witchcraft flick. This is the best of the bunch, so far at least, I’m only halfway thru the franchise. I’m keeping hope alive that there is one I can actually recommend but we are running out of options.

Next up Witchcraft IX: Bitter Flesh