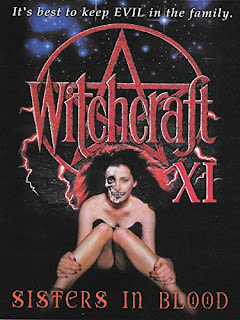 This movie opens with a couple in bed, William and Kelly both recast with new actors, and jumps right to some simulated naughty time. There isn’t even any dialogue yet! That’s a new record for these movies. After that we find out that Kelly’s sister, Colleen, is in college and is doing a play. The director/professor wants authenticity so he encourages them to do actual witchcraft. They do and, in the process, summon the three witches. One by one they are possessed so they can summon the demon Abaddon.

Along the way they end up killing a dude that was peeping on them, because of course they had to be topless to cast the spell, which involves detectives Lutz and Garner. Oh god damn it Stephanie Beaton is back. They run into William and Kelly at the scene of the crime and together they end up stopping the witches possessing the girls and save the day. But not before there is a lot of rolling around in the sheets.

This is the same freaking plot again! Okay I guess it isn’t vampires and is instead some dead witches trying to summon a demon. But really it isn’t any different. At this point I don’t even know what I’m trying to review. This series clearly doesn’t care at all about plot and characters. I’ve mentioned that before, but this cements it in stone. How do I review something that isn’t trying to be a movie in the sense of actually telling a story? If you are out there and have that argument in your head, it is legit.

You know I don’t care what you intended to make. The minute someone tried to sell these and take people’s money you are responsible for making the product. These are sold as movies and fans are given the impression that is what they should expect including at least the attempt at telling a story. So damn it I’m going to be annoyed when you fail to do so. I’ve got five more of these things to watch and that is the standard I’m going to hold them to like it or not. Be prepared for me to keep beating this dead horse. Please allow me to continue. 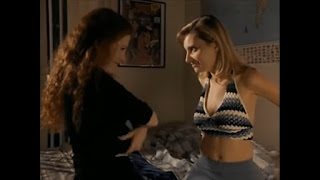 Just like the previous movies while Witchcraft XI lacks plot it is filled with padding. From the extra-long opening credits to the unnecessary and odd photo shoot that isn’t explained with a single line of dialogue it is clear that they exist just to fill out ninety minutes. There are also phone calls, walking, and talking on the phone. None of which does a damn thing to develop any story.

I did notice something new. Not that it was great in the past, but the editing is terrible in this movie. There are two distinct plotlines one with the girls and the other with Lutz, William, and company. They do awkwardly intersect at the end, but I don’t think that most of the actors share a scene until then. This feels like a movie that was cobbled together from different shoots using what actors were available that day. It might not be the case, but something is obviously not right. The good news is that they seem to have fixed the audio issues that plagued previous entries so I can hear the dialogue. Which is awful.

I’m not going to waste any more time telling you not to watch Witchcraft XI: Sisters in Blood. It is a terrible movie you should skip. Sadly, my OCD and the fact that I promised to watch the rest of these is going to make me sit thru the last five. With that in mind…

Next up Witchcraft XII: In the Lair of the Serpent