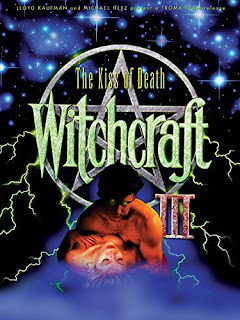 The third entry has us watching William, still played by Charles Solomon Jr., who is now a lawyer. He is defending a young man named Ruben on a murder charge. An ambitious prosecutor is using the high-profile case to get a promotion so there is some conflict between the two. We also meet an evil warlock named Louis who likes to kiss women and kill them so he can then kiss his girlfriend and get her high. At least that is what I think is going on.

William and Louis bump into each other and become friends. I thought that it was because Louis knew that William was another warlock, but later on it is hinted at that he had no idea who he was. I guess it was just random. We also meet Reverend Jondular thru Ruben and he becomes a spiritual advisor and mentor to William. At least until he dies off screen and leaves William his sweet magic cane. Louis wants William’s girlfriend, so they fight and by fight, I mean kick each other in the nuts until Louis gets beat down with the magic cane. End of the movie.

Witchcraft III is a mess. While I again appreciate the effort to continue the story from the earlier two movies there isn’t enough material here for a feature. Louis is bad and wants William’s girlfriend. That is basically the entire movie. You would think that the writers would try and explain Louis’ power and why he kills ladies and what he is taking from them with his warlock kiss, but no. The only explanation we get is that he is bad. Instead of plot, we get “exciting” scenes of people driving, walking, checking for change to buy a paper, drinking in a bar, and other such goodies. God forbid you spend anytime developing the characters. 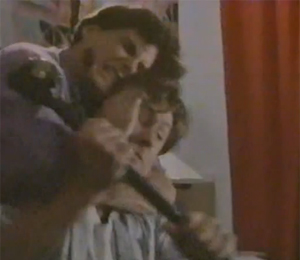 Speaking of characters, I don’t know if it is the inferior script but somehow Charles Solomon Jr. gives a worse performance here than the movie before. Dude this is your second bite at this apple, and you should be getting better, not worse at it. His line delivery is wooden and any attempt at emotions are just bad. Not the Room bad, but close. The rest of the cast isn’t much better and stumbles over their lines at times.

Remember the warlocks kiss I was talking about earlier. Well, most of the kills in this movie have Louis kissing a lady after his eyes go yellow, think Michael Jackson’s Thriller video, and we get a puff of smoke. Then that is it. I’m not kidding that is how the kills in this movie play out. I guess it makes sense with the Kiss of Death in the title but damn it. What is really strange is how much this movie likes to show closeups of people kissing. Every sex scene, and there are quite a few, focus on people slobbering all over each other. This movie really takes the kissing part of the title seriously. At the end the girlfriend is saved by a… you guessed it a kiss!

I’m afraid that I’ve figured out the Witchcraft formula. They have dumped the gore and attempts at a coherent story line for bad nineties saxophone music, neon, and nudity. I really hope that isn’t the case but that is the vibe I’m getting. If it isn’t obvious, I’m suggesting you pass on this one as well.

Next up Witchcraft IV: The Virgin Heart