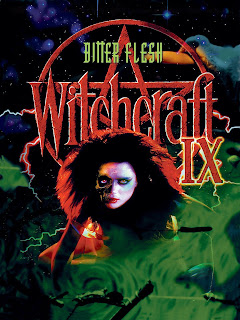 My last review for this franchise probably sounded hopeful. I thought having ditched the rotating stories around the William character that they could then explore some different things. Witchcraft VIII wasn’t great, but it was better because I think that the filmmakers involved had more freedom. So, what does the series do? Bring back the director of the worst movie in the franchise so far and un-kill William. God damn it.

Yeah, William is back and is killed at an art gallery opening or something like that. We never find out what it was or how he died. Nope, just get to see him wander around as a ghost that no one can see or hear. Well until he meets the hooker with the heart of gold, Sheila, who was in a coma once and can now hear dead people and see the future but only sometimes. She and dead William team up to stop some cultists that worship Kofu the Egyptian god who want to summon Satan or maybe not. Really it isn’t clear. Also, William, while dead, sees his body walking around as it was possessed. The bad guys want to kill his girlfriend because he sent her his power before he died… which he doesn’t seem to know.

This movie is garbage. I watch a lot of bad movies, so it takes something really special to piss me off as much as Witchcraft IX did. Not only is there no attempt at a cohesive story and what we get is riddled with giant plot holes, but they don’t explain how William isn’t dead. It isn’t like they are ignoring the previous movie either as they reuse footage from part VII, which is where they killed him off. The best part is they actually show you him dying on screen from that movie and don’t explain or acknowledge the how or why the character isn’t dead. This is from the same director so he probably should remember the movie he made just a couple of years ago.

Remember when I reviewed part VII, I talked about how odd it was that they liked to zoom the camera in on panties. They mixed it up this time because almost every scene begins or ends on a cleavage shot. Not quite as creepy or sketchy but still someone has issues, they need to work out. The acting is flat with horrible line delivery which itself is further complicated with juvenile dialogue. We also get lots of padding here with ambulances, stock footage of a college campus, dead William walking around, phone calls, and of course driving.

For whatever reason they added a subplot with the cops Lutz and Garner tracking down the killer who is ripping hearts out for Kofu and other reasons never explained. They don’t have much to do, which is good since the actors recast in these roles are excruciatingly bad. Stephanie Beaton as Lutz can’t deliver a line in anything other than a monotone. And that is when she can actually not stumble over them.

I never do this but here I think it is appropriate. The director’s name is Michael Paul Girard and he is a hack. Seriously this movie is trash, and no one should watch it. Hell, we shouldn’t even acknowledge it’s existence. I know it takes a village to make such a turd, but he is the common denominator between the two worst entries into what is admittedly a crappy franchise. Stay far away from Witchcraft IX: Bitter Flesh.

Next up Witchcraft X: Mistress of the Craft