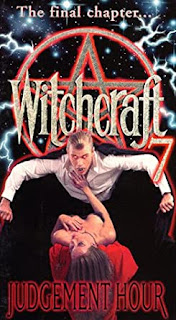 It seems as if the writers tried to mix things up this time. Instead of warlocks or Satanists trying to summon the Devil we have a vampire trying to take over the world’s blood supply thru a corporate merger. Um… okay it is certainly different. The movie starts with that vampire draining a girl at a party. She dies and comes back as a vampire in the hospital. That seems awfully careless of a character that is supposed to be five hundred years old.

At the hospital is our old pal William the warlock who realizes that something isn’t right. He calls detectives Lutz and Garner who stop by in time for the dead woman to sit up on the slab and proceed to kick their asses. They head off in pursuit and find her chowing down on an unfortunate jogger in the park. There is a fight and William runs a stake thru her heart “out of instinct”. I guess he has forgotten about his power again. Also, the detectives are totally against the idea of vampires despite having already seen shit that proved the supernatural exists. Stuff happens and the vampire is staked but not before something shocking happens! William is killed which is why I think that the movie had the stinger “The Final Chapter”. If only that were true. 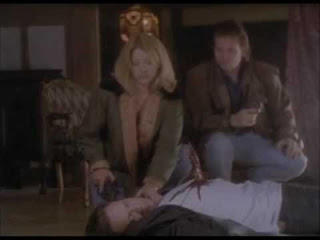 Before you think I’m being harsh let me explain a few things. The story is paper thin. Vampire wants to do vampire stuff, William gets in the way, and lots of naked ladies. That’s it in a nutshell. When the characters do have their clothes on we see them random sword practice, board meetings, and phone calls. This movie also has zero kills and gore with the best you can hope for is some store-bought costume teeth and a trickle of blood. The one big effect they try is when the vampire turns into a bat or some shit like that. It is rubbery and looks awful.

A few other random things. William is played this time by David Byrnes, who was in Intruder. I’d much rather be watching that. Also, inexplicably they not only recast Lutz but gender swapped the character who is now a woman. Why not just make a new character and not confuse us? Well, that would have required someone who knew how to write a script so never mind. Finally, I just felt creepy watching this movie. Not because of the nudity but because of the incessant zoom in close up shots of panties.

This is by far the worst of the lot so far and if you have read my other reviews, you know how big of a deal that is. My optimism of finding a watchable movie in this franchise is beginning to wane but I shall carry on.

Next up is Witchcraft VIII: Salem’s Ghost

Posted by Gutmunchers Lives at 8:14 PM