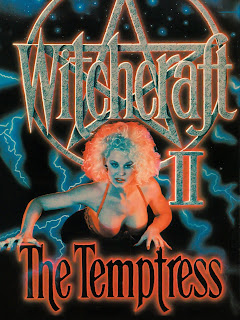 Okay I get it now. If this movie is any indication of what I’m in for I can see why this franchise has such an awful reputation. This time around we meet William who is about to graduate high school despite looking like he is pushing thirty, which the actor was. He has a girlfriend named Michelle who won’t let him do naughty stuff with her. That is good for the witch because she needs to bang him first so that their kid can rule the world. Oh, and the witch next door is actually the one from the first movie who we see for a hot second before she morphs into the sexy blonde lady. I guess they can do that now. Plus I think that was his mom, or maybe not biological just spiritual mom… it all just seems gross.

Speaking of the first movie they rewrite the ending here with a bit of dialogue and have it that his mom, Grace, killed John and Elizabeth instead of the butler. Which by the way if you have read my review you should know that is how it went down. Again, you really should do that before continuing. After doing away with one of his friends and adoptive parents she tries to… I guess turn him to the dark side maybe. She keeps telling him to embrace his anger and stuff so yeah. It doesn’t work and we see him with his girlfriend for a happy ending. I mean his adoptive parents are dead but no biggie.

Let me start by saying something nice about Witchcraft II. I appreciate that they tried to connect the two movies. It annoyed me that they rewrote the ending when I think it wasn’t necessary. They could have just done the old Halloween trick and had his mom die in a car accident offscreen. But no, they had to change the ending. Okay I guess that is the way it goes. At least they gave it a shot.

With that out of the way let us dig into it. This movie has the same sort of pacing issues as the first, only here it is much worse. The padding is far more obvious with many scenes following the characters long after any dialogue necessary to advance the plot has been uttered. We also get an extended bit with the witch rolling around on what I think are black silk sheets like a bad Madonna video as she moans William’s name. Speaking of dialogue, it is stilted which makes the mediocre acting all that more noticeable. 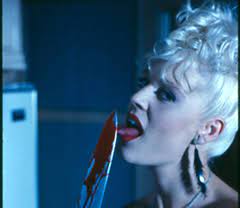 If the above isn’t enough to make you pass on this one how about the nerdy girl who is clearly hot but wears glasses trope? Yeah, we get that here. And then they double down with her having vital information that she inexplicably refuses to give him over the phone. And yes, she is so dead! This isn’t the most original movie if you haven’t figured that out yet. The music has changed from the eighty’s synth music from the previous flick to a generic rock song and then back to synth music. All of it forgettable.

There are a measly four kills, well I guess five if you count the witch. All of them are uninspired and beyond tame. We get to see a neck snapped which was lamely shot. Another person gets tossed out a window, body on the ground with a trickle of blood. Yet another trickle of blood when someone bangs their head and dies. At least the first movie gave me something bloody to sink my gore hound teeth into. This one not so much.

I have the sinking feeling that this isn’t going to be getting better from here on out. But fear not I’ll keep at it and finish all sixteen of these. I’m doing this so you don’t have to. Obviously, I don’t recommend Witchcraft II: The Temptress.

Next up Witchcraft III: The Kiss of Death