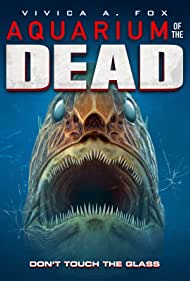 The Asylum is at it again with this third entry into the Zoombies trilogy, though they mix it up a bit and set this one at an aquarium. A batch of the bad drugs that caused the animals at other facilities to go all zombie gets sent to an aquarium and brings an octopus back from the dead. It kills some people and then sneaks off into the air ventilation system randomly turning other critters into zombies. The folks that are trapped in the aquarium, because they have a state-of-the-art security system that locks them in, struggle to reach and then turn on the generator so they can make good their escape. Toss in some betrayal, corrupt politicians, and you have the movie.

This is awful. I mean most of the Asylum movies aren’t great, but like the Sharknado series they at least try to be fun. This one not only doesn’t embrace the cheese but manages to be boring. There is zero tongue in cheek gags that attempt to wink at the audience, which is a hallmark of when these movies are good. Instead, what we get is a movie that instead is trying to just be a bad version of monster flicks we have already seen before. I’ve already mentioned their attempts to do so in my brief synopsis above. But let me add some more below.

The characters are forced to get to the McGuffin, here the generator. Along the way they get picked off one at a time by various monsters. Whether it be the zombie sharks, dolphins, crocodiles, or walrus’ it is all the same thing. Walk down a hallway, encounter something, get chased with perhaps someone dying and then get to a room. Talk on the walkie with the character in the security office who is directing them. Then go back into a hallway… repeat until you get to a feature length runtime and stop. I’m okay with you making a bad movie, but for the love of God don’t make a boring bad movie. That is what we get here and it sucks.

The creatures, as you would expect, are all CGI. Somehow, I think that they have managed to make them worse than the previous movies. They barely interact with the actors and when it does the shots simply don’t match up. You might also be wondering why there are crocodiles in the aquarium. Well, I’ve been to an aquarium that did have some crocodiles, but I think that the real reason for them to be in this movie is to use the digital models from the previous Zoombies movie. The effects are basically the same thing as if you are paying attention the digital models make the same movements repeatedly. I don’t expect that much from a movie like this, but at least make some effort. Hell, the only scene with a zombie shark has them laying perfectly still in a hallway… C’mon guys!

This is a bad movie and a crappy way inclusion into this year’s October movie marathon. But then again, I watch a lot of terrible low budget movies, so this was likely to happen. Hopefully, I’ll get to some decent ones soon enough. With that in mind I recommend skipping Aquarium of the Dead.