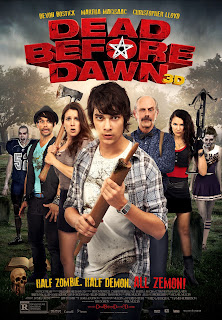 We meet Casper who has some bad memories of the family business, the Occult Barn. We see in a flashback/dream that he watched his father die on the floor after a particularly nasty item fell on him. This has scarred poor Casper who hasn’t set foot in the place since it happened. But when his grandfather, played by the awesome Christopher Lloyd, wins an award he is guilted into covering the shop. The rules are never close during business hours, and never ever go withing spitting distance of an urn.

The girl Casper has a crush on stops by the shop with some other kids from the college and trying to impress her he takes the urn down from the shelf so she can have a closer look. It breaks and he freaks out. They tease him and make up a curse that the evil spirit they just released will inflict on them. Anyone they look at will kill themselves and then come back to murder them. It will be death by hickey… which is a thing, I guess. But if they give a hickey to one of the recently returned monsters after them then they become their slave. Also, they have to put the demon back in the urn before dawn or they will be cursed forever. Much mayhem and silliness ensue as the entire town is trying to kill them before the credits roll.

I watched this one when it first came out. Damn that was ten years ago! I remember liking it a lot and I have to say that nothing has changed. The story is solid and checks a lot of boxes for me. They quickly establish the characters and the outline of the story. Then they jump right into the action with lots of creatures show up and start killing folks. Honestly, that is about all you can ask from a monster movie like Dead Before Dawn. They double down on the fun with a creative twist where the characters make up the curse as a goof, not knowing that the demon they release is angry and uses it against them. So we get for the first time in cinematic history Zemons, half demon and half zombie! This is a nice and funny take on the typical possessed and/or zombie flicks that we get so often. 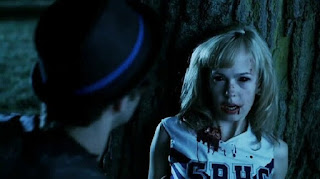 If what you have read so far hasn’t clued you in yet this movie is played for some laughs and it works. From the silly nature of them making up the rules to the curse on the fly to one of our main characters getting turned into a Zemon when he gets a “dickey” from one of them there is a lot here that had me smiling. They even acknowledge that they have cast Christopher Lloyd by having his character yell a familiar catch phrase when he finds the broken urn. You know the one… it rhymes with late dot!

The design of the creatures are generic with them basically just looking pale with weird eyes. But I was okay with that as they do look demonic. There are also some fun kills that while not overly explicit are creative and work with the overall comedic nature of Dead Before Dawn. There is a kick to the face, a leap from a balcony, some trophy stabbing, crossbow action, a toaster in the tub, and a gnarly looking snapped neck. Though my favorite is the death by first down marker at the football game.

Good cast, decent creatures, fun kills, and jokes that land most of the time make for an entertaining way to kill an hour and a half. I feel like this one maybe slipped past a lot of folks as I don’t see that many people talking about it. I recommend you all give it a chance. It is a lot of fun.

Posted by Gutmunchers Lives at 9:56 AM